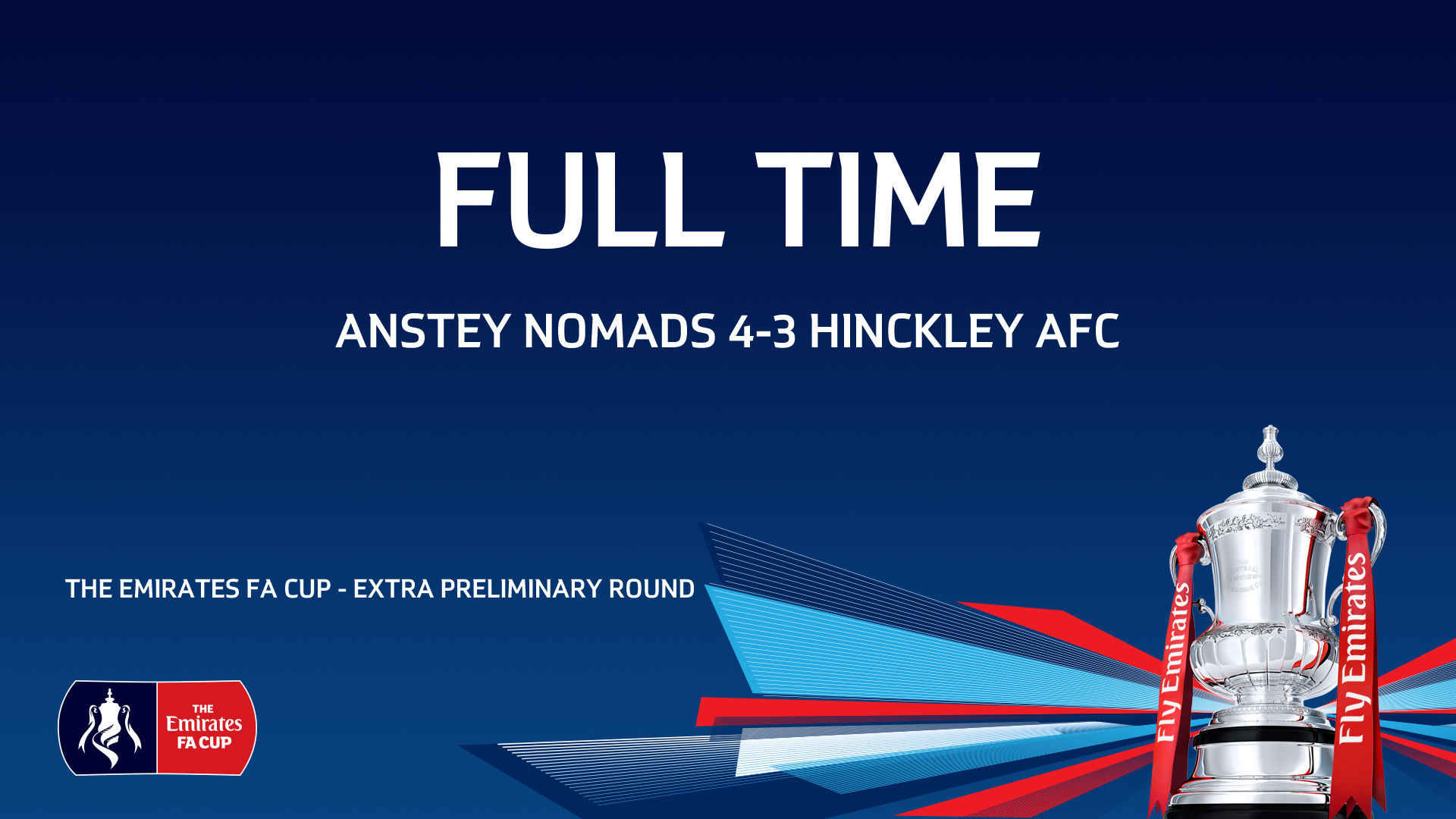 Hinckley AFC’s Emirates FA Cup dream is over for another year as Anstey Nomads reached the preliminary round with a 4-3 extra time win.

In what was a thrilling cup tie throughout for the 237 spectators, Josh Gough’s winner two minutes from the end of extra time sealed progression for Anstey.

Hinckley led twice in normal time through Sam Belcher and Louis Hamilton, and were four minutes from winning in the 90 minutes until Cosmos Matwasa fired home a fine strike from range.

Hamilton netted again in extra time to bring the tie back to 3-3, and with both sides starting to look towards penalties, Gough popped up to send Anstey through.

James Jepson made two changes to his Hinckley side that started the original tie on Saturday. Tom Maddison and Hamilton returned, Jepson himself and Steve Chaplin dropping to the bench.

Hinckley started the game brightly in their search for their first win of the season, and opened the scoring after just four minutes. Callum Willimont’s cross-field pass picked out Belcher, who controlled expertly before finishing coolly from eight yards.

Corey Armeni headed Nkosinathi Ncube’s cross over in Anstey’s first effort, but Hinckley continued to have the better of the early play.

After Grant Ryan’s persistence, Kieran Harrison headed Maddison’s cross goalbound only to be denied by Joe Smith’s diving save, before the ‘keeper made a similar save to deny Ryan as he got on the end of Maddison’s pass.

But as the half wore on, Anstey grew more into the game, though Sam Marshall and Matwasa could only fire over from range as Hinckley restricted the home side’s efforts on goal.

Then Liam Canavan, the former Hinckley United man who controlled the midfield for large spells, switched play to find Ashley Day, who tricked his way into space but flashed his effort across the face of goal.

Despite Anstey now holding the upper hand, it was Hinckley who came closest to the next goal – and they were agonisingly close to doubling their lead 12 minutes before the break. Belcher’s clever pass found Ryan, who connected sweetly with his strike that cannoned off the inside of the post and bounced to safety.

And six minutes later, that fine margin proved costly. Canavan went down after Mahmoud Juma’s late challenge, but dusted himself down to curl home the resulting free kick.

As the half drew to a close, the hosts came close to taking the lead but after a fine move down their right, Day set up Armeni to be denied by Hinckley stopper Jacob Wood.

That sent the sides in level at the break, but Hinckley came out firing after it and nearly took the lead when Sam Belcher’s effort from Chris Hollist’s pull back was blocked.

They didn’t have to wait much longer, though, for their second. Belcher turned provider, feeding Hamilton to blast home his first for the club, beating Smith at his near post.

Hamilton then crossed for Maddison to head wide as Hinckley sought the two-goal lead that has eluded them all season.

But it eluded them again tonight and, as in the first half, Anstey grew stronger as the period grew older. Their first effort of the second half was an audacious one, Canavan trying his luck from a free kick in the centre circle which he struck well but the retreating Wood dealt with the effort.

Then, Harry Sheffield headed over and Matwasa forced Wood into action as Anstey sought their leveller.

And just as time was starting to run out, they found it. Matwasa was allowed too much time to pick his spot from 25 yards, but pick it he did as his effort found the bottom corner from outside the box to draw the tie level again.

Having been in control for most of the half, Hinckley were now on the back foot and just about held out for extra time. That was despite two good chances for Anstey in stoppage time – another Canavan free kick striking the bar, before Day fired into the side netting with just Wood to beat.

And so, in the end, Hinckley were grateful that they reached extra time – but rather than score in the opening few minutes of the period, this time they conceded early instead.

A cross from the right found Day, Wood denied him with a point blank save but the rebound fell to Armeni, who fired home despite the best efforts of Juma and Jason Lee on the line.

Wood then denied Day again, before Hinckley gained the upper hand again as the momentum swung back and forth in an extra time period that was wide open.

After a sweeping move, Maddison’s cross was glanced narrowly wide by Belcher, before Ryan’s snapshot was well saved.

Ryan had another chance in the second minute of the second period, but was denied by Smith when one-on-one before seeing the ‘keeper pull off a fine save from the rebound.

From the resulting corner, Lee saw an effort cleared off the line as Hinckley sought the goal that would keep their Cup dreams alive.

And it came ten minutes from time. Hamilton netted for the second time on the night, a composed low finish after Ryan’s pull back set him up.

That brought the tie all square for the fourth time across two legs, the sides still unable to be separated after 200 minutes of football.

And, after Ryan saw an effort deflected over, the decisive touch came from Anstey’s Gough with two minutes to play. Armeni did well to find a pocket of space, and slipped Gough through on goal who made no mistake in putting his side ahead to kill Hinckley off once and for all.

That was all that could separate the sides in 210 minutes, but Anstey progress to the next round while Hinckley have a week to recover ahead of the trip to Nuneaton Griff next Wednesday evening.