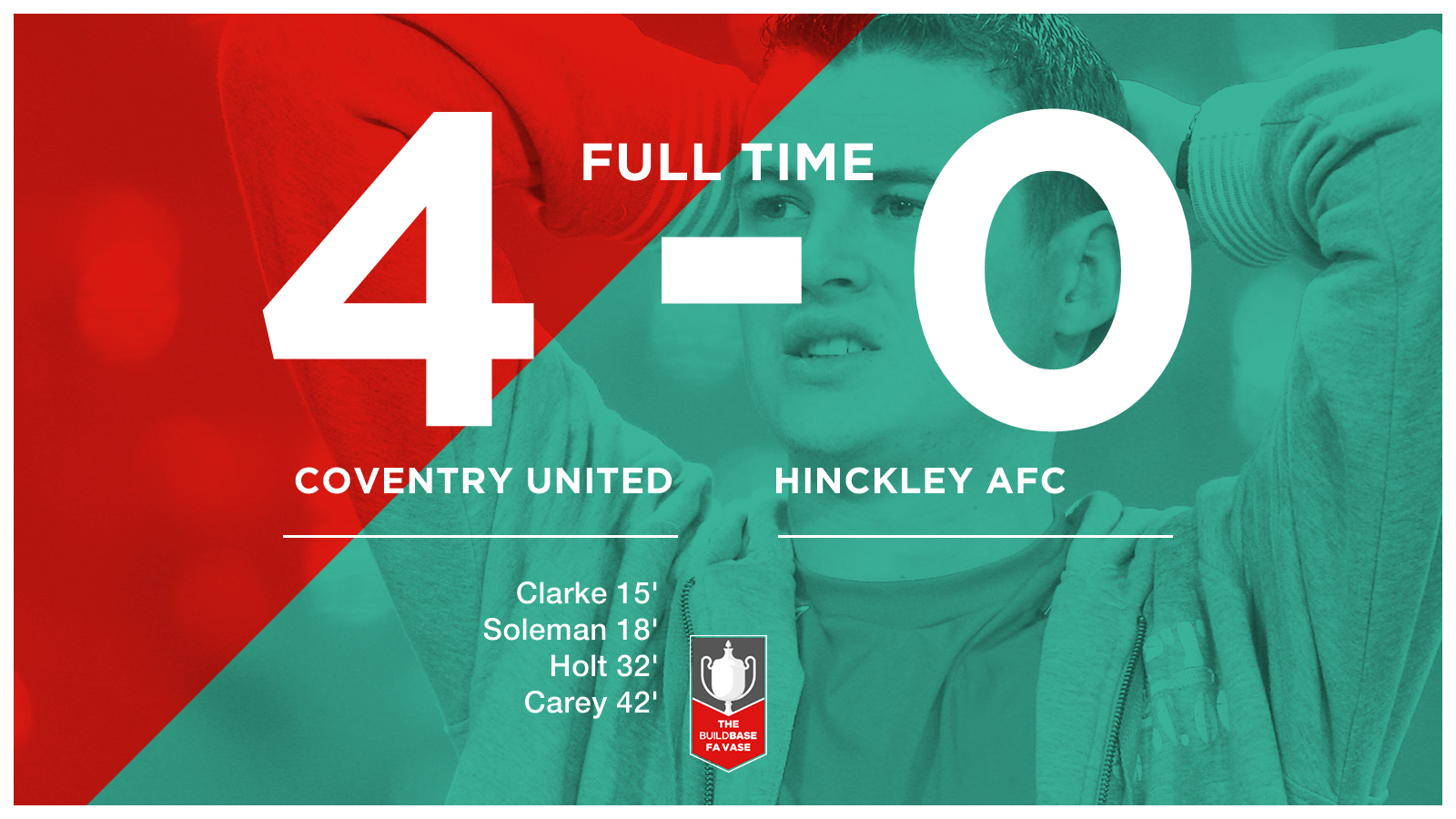 Hinckley AFC’s Buildbase FA Vase journey is over for another season as four first half goals eased Coventry United into the fourth round.

AFC went into the game as one of only four sides who could have made the fourth round for three straight years, but any hopes they had of making that rare feat were quickly dashed.

United blew them away during a 27 minute first half spell, in which they netted four goals to condemn managerless Hinckley to defeat.

Hit by the resignations of James Jepson and John Ramshaw 24 hours before the game, Hinckley were under the temporary guidance of Dave Gunn who took control at short notice on Friday afternoon.

Jean Dakouri and Sam Belcher both returned to the Hinckley line up after missing last week’s win at Rocester, while new signing Anton Daniels started after joining from AFC Mansfield.

But in front of a surprisingly small crowd of just 145, at least 50 of which made the short trip down from Hinckley, the visitors never got going against their higher level opponents.

And after having an early half chance which was easily dealt with by Brendan Bunn, Hinckley spent much of the rest of the half on the back foot.

Curvin Ellis forced George Warren into early action after a mazy run, before Kyle Carey did the same after breaking into the box.

And after knocking at the door twice, the Red and Greens broke through it on the quarter hour mark. Centre back Jamal Clarke was part of the Hinckley side that reached the fifth round two seasons ago, but he put pay to any repeat by opening the scoring. Luke Downes’ free kick fell to him, and he latched onto a loose ball just inside the box as a neat finish found the bottom corner.

Three minutes later, it was 2-0. Carey’s cross was met by a looping header from Arum Soleman, Warren left grasping at thin air as AFC found themselves with a mountain to climb.

United continued to hold the upper hand and controlled much of the game, but while the game remained at 2-0 Hinckley weren’t out of it.

And when Ellis mis-kicked a golden chance on the half hour to spurn the opportunity for a third goal, they wondered if their luck might be changing.

But that only spurred the hosts on even more as they sought to put the game out of sight by half time. Jake Holt’s initial free kick was blocked, but the ball fell back to him as he drove home from the edge of the box for a third.

Belcher had a half chance but smashed over on a rare Hinckley foray forward, but Warren remained the busier keeper and Hinckley had him to thank when he pulled off a double save just before half time.

And that could have proved crucial when Hinckley had their best chance of the match shortly afterwards, when Wilson had a clear sight of goal was denied by Bunn’s legs.

And from that, the hosts broke forward at pace and Carey beat the offside trap to round Warren and slot into the empty net to round off a half for Hinckley to forget.

While the home side were impressive for their movement of the ball in the first half, they were equally impressive for different reasons in the second – managing the game professionally and rarely allowing Hinckley the opportunities to dream of the most remarkable comeback.

In the first effort on target of the half, Jason Lee tried his luck from an ambitious range which Bunn clutched at the second attempt – before United flashed one across the face of goal as they went in search of a fifth.

But the hosts had taken their foot off the gas after their rampant first half, and notable action was few and far between.

But the best performers of the half were those supporters who had travelled from Hinckley – loud and proud despite trailing 4-0 and the adversity of the 24 hours before.

And the chants were still flowing from the fans as the final whistle went and the curtain came down on AFC’s journey in the FA Vase for this campaign, as the hosts eased into the competition’s last 32.