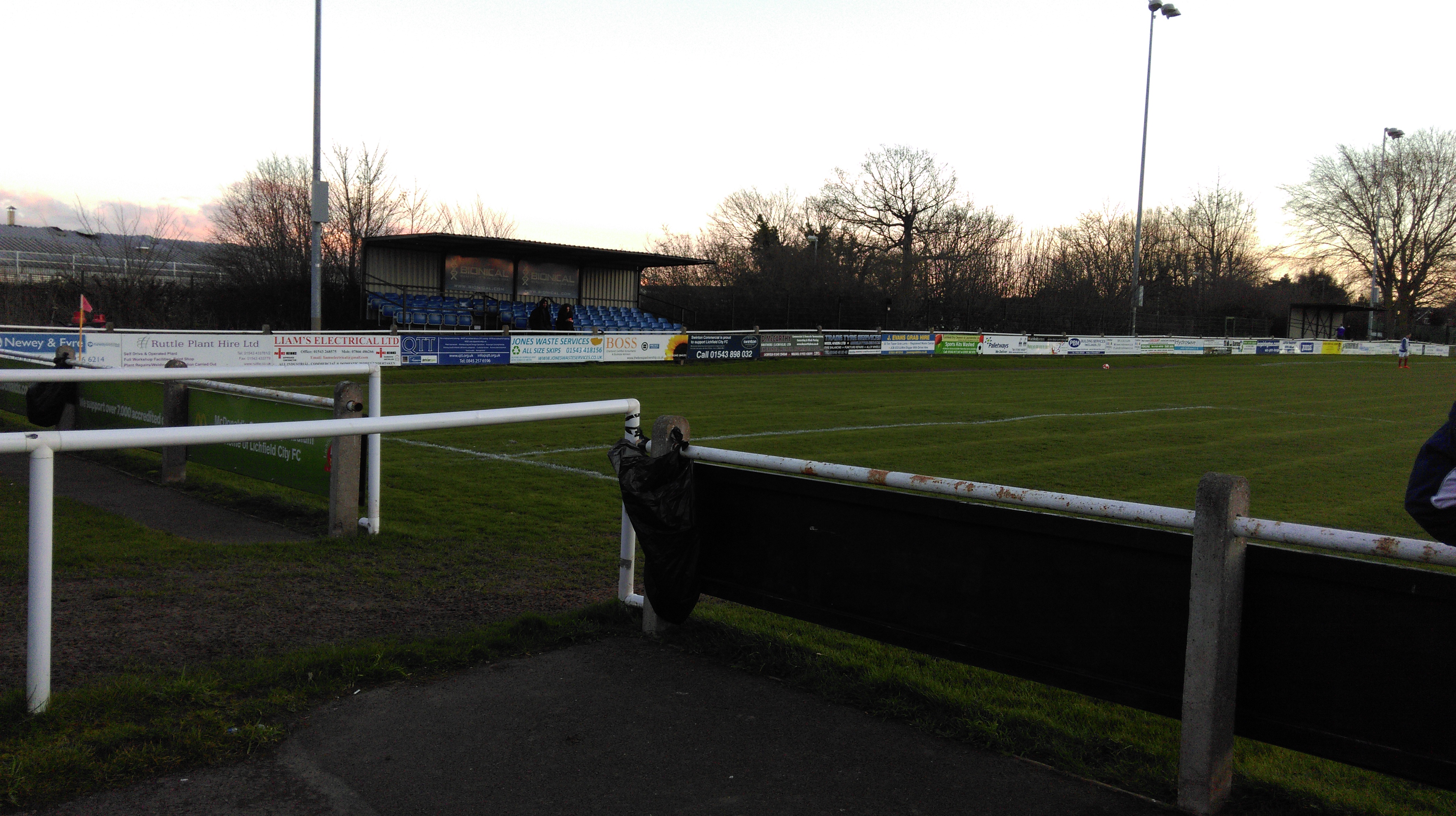 On a warm spring afternoon Hinckley’s young squad, which featured eight Under 18s during the game, fought valiantly and more than competed with their high flying opponents.

But they were dealt a cruel late blow when Evans expertly whipped a hotly contested 25-yard free kick into the top corner to deny them a point.

Manager John Ramshaw made three changes to his side that lost to Paget Rangers just two days earlier. Yinka Adebowale returned in goal while youngsters Reece Giles and Joe Glover made their first league starts.

But despite playing against a free-scoring side who have netted more than 100 times this season, Hinckley competed well and had chances of their own to open the scoring after the hosts’ Dan Shepperd headed wide from a corner.

Hinckley’s Louis Hamilton and Lichfield’s Evans both tested the opposition goalkeepers from range, before Hinckley had the game’s first real chance. Hamilton’s corner found Tyrone Burton in space, but he couldn’t connect with the header and Jenkins gratefully clutched Ellis Chambers’ follow-up.

Grant Ryan then scuffed one to give Jenkins a comfortable save, but the home side started to see more of the play either side of a drinks break.

After it, Lichfield should have scored with their best move of the match. It started with Adam Robinson in defence who did superbly to dribble out, and a neat move ended with Danny Thurstance finding Adam Keating in space on the edge of the box, who was denied by a fine Adebowale save.

The ‘keeper then tipped over Matt Hardiman’s swerving strike as Lichfield knocked at the door.

But again, Hinckley still competed well and Hamilton had a shot blocked after Ryan’s flick on as neither side could break the deadlock before the break.

The second half started in similar fashion, Lichfield with more of the play but they rarely called Adebowale into action. He tipped away Evans’ cross-shot but, other than beating away Brad Lindsey’s free kick, the stopper was largely untroubled.

Indeed, Hinckley had the best chance of the half as they more than held their own against a top four side – when Chris Hollist could have ran through on goal, but Hamilton got in his way and after Lichfield got men behind the ball, Hollist could only shoot straight at Jenkins.

Then, Callum Carey’s cross was taken off the head of the Ryan Mills six yards out as Hinckley grew in belief.

But they were hit with a sucker punch as the game entered its final ten minutes. The referee ignored a push on Reece Giles and instead blew for a foul against Ollie Hart just seconds later.

Hinckley were furious with the decision, and their woes compounded as Evans powerfully struck one beyond Adebowale to break the deadlock.

The way the game went, you felt like Hinckley would have one chance to hit back – and it came five minutes later when a corner found Burton, whose header was cleared off the line and Ryan’s follow-up flashed across the face of goal.

But despite the defeat, Hinckley were warmly applauded off at the end by the healthy travelling contingent which appreciated the shift their players put in.