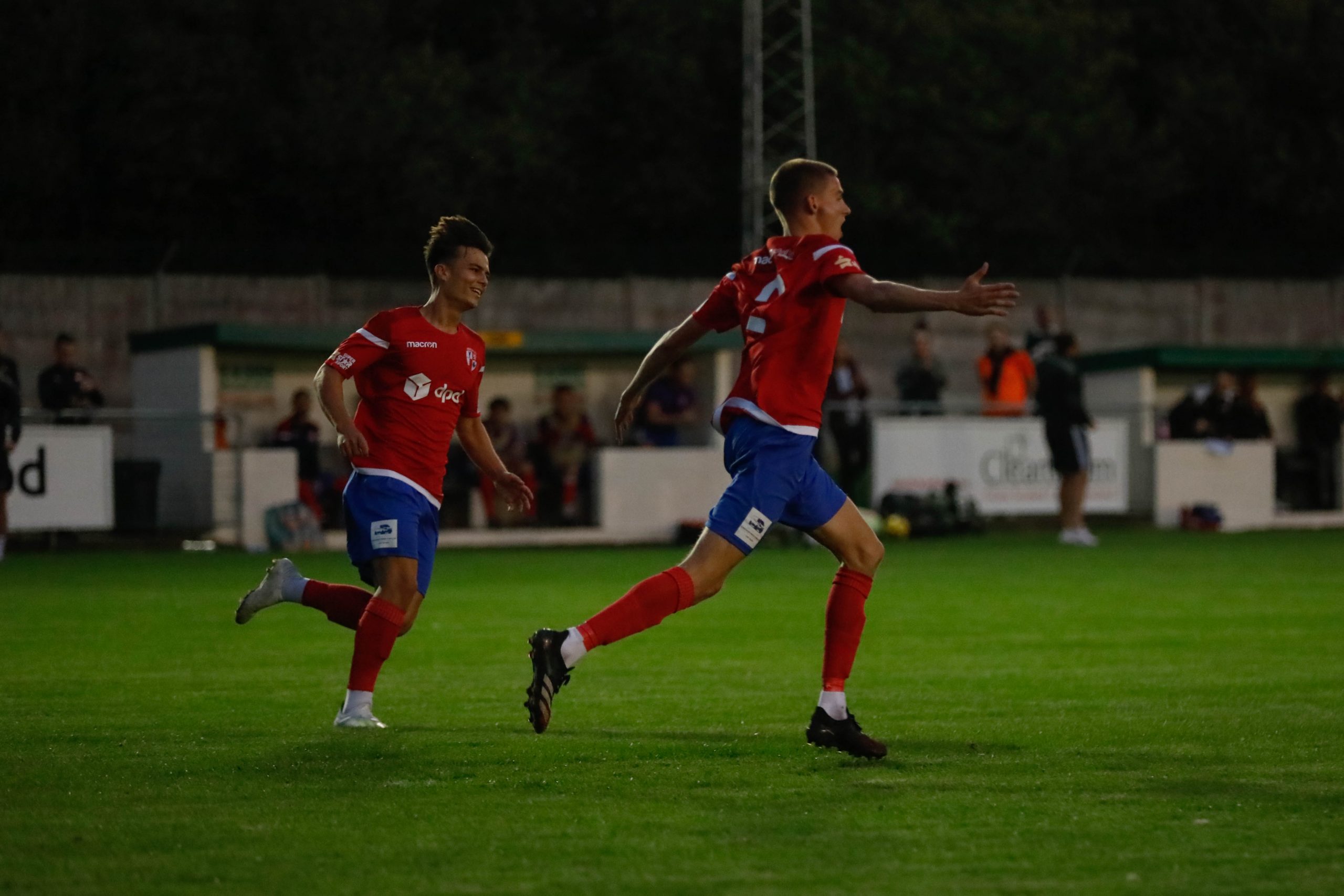 Hinckley AFC conceded a stoppage time equaliser as Cadbury Athletic came from two goals down to snatch a 2-2 draw in AFC’s first game of the season.

Hinckley’s first home game back in the borough at their new Kirkby Road home saw an impressive attendance of 208 – the biggest crowd for a midweek league match in over four years.

And they watched their side start brightly in their first competitive outing for nearly six months, Drew Kear handing them an early lead and Luke Richards doubling it from the penalty spot.

But Cadbury hit back after the break, and after Danny Morris scored on the hour they sensed a comeback, snatching a draw through Emile Beckford’s 92nd minute strike.

It meant a youthful look to the team that started the game – six of the ten outfield players under the age of 21 – but they started brightly with energy and purpose in their early play.

There was quality to match the endeavour too – Dan Hoskins driving over and Callum Martin, a constant thorn in the Cadbury side, forcing ‘keeper Ryan Pratt into a near post save in the opening five minutes.

Then came Hinckley’s goal as they made their early pressure tell, Jack Edwards’ clever clipped ball finding an equally impressive run of Kear, who got inside his man and fired between Pratt’s legs for the first goal of Hinckley’s new era.

Then, Richards headed Danny Harris’ cross wide and Edwards drove one just over as Hinckley continued their dominant start.

But the chances flowed less freely as the half wore on and the visitors got organised at the back. Billy Spink dealt comfortably with Cadbury’s first effort at goal, a deflected shot from James Ward.

Hinckley still had the better of the half, albeit not as free flowing as the opening 20 minutes, and got further reward on the half hour. Oli Bradshaw was bundled over in the box, and Richards send Pratt the wrong way from the spot to add a second.

Cadbury would have been relieved to make it to half time with a 2-0 deficit in a half where Hinckley had much the better chances, but the second half was a different story as the visitors used the slope to their advantage.

They made two changes at the break and immediately looked better for it, although it wasn’t until Beckford headed over from a corner that they started to get close to testing Spink.

Hinckley had a similar situation as Bradshaw saw a header saved, but the visitors continued to pump balls into the box in the hope of getting back into the game.

And they slashed their deficit in half midway through the second period when Morris rose highest from a corner to power home despite Spink getting a hand to the header.

That gave the visitors belief, and Beckford fired wide of the near post as Hinckley struggled for someone to put their foot on the ball and their missing experience started to show.

Hinckley still had opportunities of their own – Richards had the ball in the net but was denied by the linesman’s flag, while Pratt denied both Richards and Kear.

The visitors, though, sensed they could snatch something – although Hinckley thought they’d held on for the win when Spink, who barely needed to make a save in the match, denied substitute Taylor Homer with a fine point blank stop as the game entered stoppage time.

But the Chocolatemen had one more chance to pump a high ball into the box and as Hinckley failed to clear, it landed at the feet of Beckford who lashed into the roof of the net on the turn to spark wild celebrations from the visiting players and bench.

It left AFC disconsolate at letting their two-goal lead slip and they have to make do with a draw from their opening game ahead of the visit of Uttoxeter Town on Saturday.