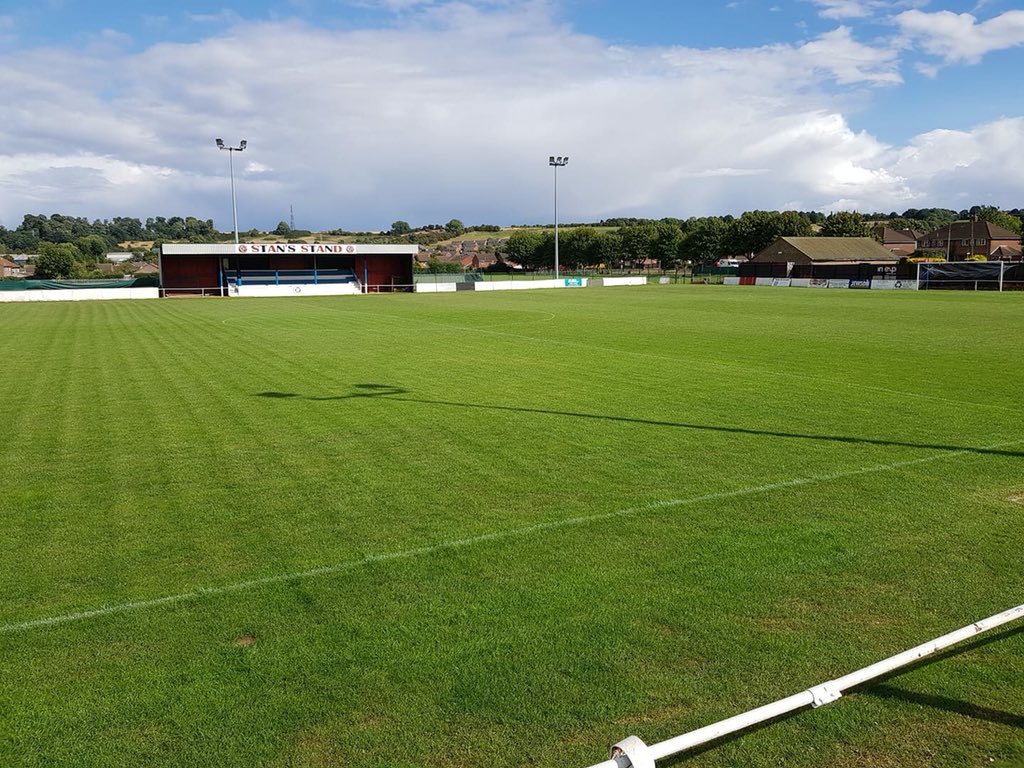 But it was a win that made their fans endure a nervy few minutes at the end after a Harrowby comeback left a seemingly comfortable win in jeopardy.

Leading 4-1 with a little over five minutes remaining, AFC appeared to be cruising to victory. But the home side kept battling and pulled a couple back to leave the coach load of supporters that made the trip biting their collective nails before the final whistle put them out of their misery.

Up to those shaky closing moments, it was another accomplished away performance from Hinckley who were clinical in front of goal. The opener from Ryan Slinn was a thing of beauty that will live long in the memory.

Hinckley’s first ever trip to Dickens Road was met with glorious sunshine and an excellent playing surface, and the sides produced a seven goal thriller befitting of the conditions.

Hinckley passed the ball well early on and Lewis Padmore fired a couple of efforts off target, before the home side should have scored when Dan Durkin raced in behind the visiting defence but fired against a post.

Just as the sides appeared to be going into the break deadlocked, a quick fire brace put AFC in control.

The first, from Slinn, was the goal of this and many other games. He left a couple of defenders with twisted blood as he danced into the penalty area on a mazy run before wrong footing the keeper with a neat finish into the bottom corner.

And the visitors increased their lead on the stroke of half time as Charlie Evans was Johnny-on-the-spot to stab home Ben Whitehead’s knockdown in a congested penalty area.

Stung by that double blow, the Arrows responded well after the break. They forced Hinckley on the back foot but AFC defended with great resolve and, when called upon, Matt Hill made a superb save to beat away Sam Hill’s sweetly struck goalbound volley.

And having weathered that storm, AFC increased their lead on the hour. Tom Weale played a short corner to Padmore on the edge of the box and his well struck shot took a wicked bounce in front of Phil McGann. The ‘keeper couldn’t hold on and Jacob Sturgess gleefully smashed home the rebound.

McGann redeemed himself by saving another effort from Padmore at full stretch before Jack McGovern converted Durkin’s deep cross on the far post to give Harrowby a glimmer of hope.

That hope should have been extinguished when Hinckley restored their three goal advantage. Jack Edwards was the beneficiary of Joel Heeley’s hard work as he chased down his man, won possession and got to the byline before pulling the ball back for the ever industrious Edwards to score.

But still the home side refused to give up. With six minutes remaining, Durkin raced clear of the Hinckley defence before squaring for Gareth Lee to finish, and when Durkin scored himself with a little over two minutes remaining, it set up a grandstand finale.

But Hinckley survived that and the points were theirs.