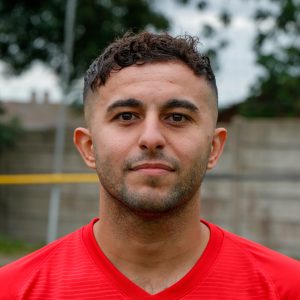 Bekir is sponsored in memory of Simon Blyth

A versatile player who can play at in midfield, full back, or on the wing, Bekir Halil was one of Carl Abbott’s first signings at the club and re-joined in the summer.

He originally followed Abbott from Wolverhampton Casuals, having previously spent time at Wednesfield Town and Gornal Athletic along with an extended trial at Walsall.

He made 14 appearances for the club during his first spell and spent time at Studley, Shawbury United and Sporting Khalsa before re-signing in the summer of 2017, and featuring under Abbott, Dale Belford and Richard Lavery.

After leaving to join Worcester City, spells at Romulus and Westfields followed before he stepped up to the National League North to join Nuneaton Borough during their relegation season.

It was an injury hit time for the combative midfielder, who re-joined Hinckley under the new management of Courtney Belford the following summer.