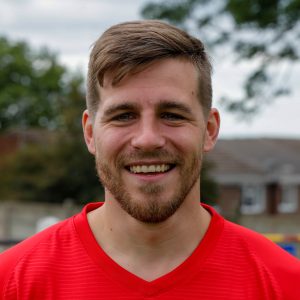 Luke is sponsored by Steve and Sally Holmes

He scored nine goals in fifteen Conference North games for a struggling Knitters side, including one on his home debut against Workington and a hat-trick in a 6-3 win against Corby Town.

He scored two goals in six appearances at the start of the 2013-14 season, in the Southern League Premier Division, before the Knitters were liquidated in October of that season.

Following the Knitters’ demise, Richards signed for Barwell and then Bedworth United, before joining Carl Abbott’s Hinckley AFC side in May 2014.

A key part of the side that finished third in the inaugural season, he went on to score more than 50 times during his first spell and had a knack of scoring when it mattered most – including in a stoppage time recovery from 3-1 down at Bolehall Swifts to salvage a 20-game unbeaten run, and twice to overturn a 2-0 deficit against Leicester Road.

He returned to AFC under the leadership of Dale Belford in 2017 after a brief spell at Shepshed Dynamo, and struck up a fierce partnership with Steve Hart, and after a year away from the club, he joined for a third spell in the summer of 2019 under Courtney Belford’s management.