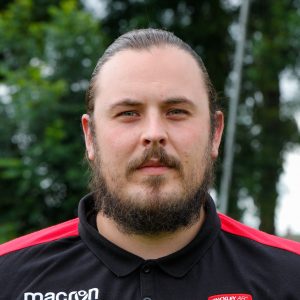 Courtney is sponsored by The Colkin Family and Julia Dale

Courtney Belford became Hinckley AFC manager at the age of 29 when he was appointed as John Ramshaw’s successor at the end of the 2018-19 season.

The son of former Hinckley boss Dale, Belford was Midlands non-league football running through his veins and brings knowledge of the area and step six with him to the club.

Formerly the manager of Nuneaton Griff, he guided a side struggling when he took over away from the relegation zone and into comfortably safe territory with limited resources.

He left the club just over a year later in a much stronger position than when he took over, and took on a role on the coaching staff at Midland League Premier side Romulus.

After leaving there, he helped out at Nuneaton Borough during their final season in the National League North and took over the reigns at Hinckley in May 2019.