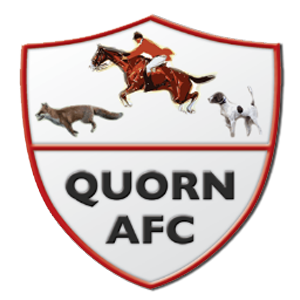 Kristian Ramsey-Dickson’s header seven minutes from the end of extra time sent Hinckley AFC into the last 32 of the Buildbase FA Vase with a 2-1 win over Quorn.
With 113 minutes on the clock and a replay on Wednesday looming, Ramsey-Dickson rose highest to meet Ryan Seal’s free kick and glance a header home to spark jubilant scenes among the majority of the 220 in attendance.
Earlier, Peter Williams had given Hinckley the lead after a goalless first half, but Jack Farmer’s own goal pulled the visitors level to take the game into an additional half hour.
Carl Abbott made just one change to his Hinckley side that beat Bolehall Swifts in a goalfest last week. Lee Butler missed out through suspension, and was replaced by Andy Westwood.
It was the hosts who started the brighter, and Hinckley had the better of the opening 25 minutes. Visiting ‘keeper Leighton Smith was called into action early on by Sean Williams’ wicked curling effort from the corner of the box, and then he had to be on hand to deny Paul Sullivan at his near post.
At the other end, Haydn Whitcombe was also impressive form, making his first save of note on the quarter hour mark to tip over Leavi Oshungbure’s diving header.
From the resulting corner, Hinckley broke forward at pace and should have taken the lead. Javia Roberts’ flick sent Ryan Seal through on goal, but he couldn’t add to his 31 goals this season as he uncharacteristically blazed over.
Set pieces were Quorn’s main threat during the early stages, and it was from a corner that Simon Alcott volleyed goalbound, only to be denied by Whitcombe’s diving save.
The closest either side came to breaking the deadlock before the break came on 35 minutes. From a wide delivery, James Williams flicked goalbound but AFC couldn’t force home in a six yard box scramble, and Smith pounced on Williams’ follow up header.
Just a minute later, Quorn came close from another set piece. Josh Selway found half a yard of space, but Whitcombe flung himself full length to tip his header onto the post.
As Hinckley continued to seek the opening goal, Sean Williams’ fine delivery hit Roberts in a great position but bounced clear, and Sullivan saw his shot saved after Roberts’ super piece of skill.
The second half started in a similar vein, Seal twisting and turning in an attempt to find a good angle but seeing his left foot shot comfortably saved, before Smith also dealt with Sean Williams’ left foot half volley.
And Hinckley’s pressure paid off when they took the lead six minutes into the half with a goal that was all Peter Williams’ own making. He robbed the ball off Joe Hopewell, carried it into the box and could have squared but opted to go it alone and fire the ball between Smith’s legs.
Then, Seal’s shot was deflected wide from Peter Williams’ knock down, and from the resulting corner Jamal Clarke’s fierce strike was diverted over the bar.
But with the clock running down, Quorn started to apply more pressure and after Nathan Dale’s free kick drifted harmlessly over, they equalised with ten minutes to play. Nick Goold’s corner was cleared straight back to him, and he drilled a low ball across goal which Farmer could only turn into the top corner leaving Whitcombe helpless.
With the game all square again, the last ten minutes saw both sides seek the goal to end the tie in normal time. Whitcombe tipped James Hicks’ bending effort around the post in Quorn’s best chance of the final stages before, at the other end, Seal could only blaze over after finding a good position.
Neither side could find the elusive winner, and that sent the tie into extra time as dictated by FA Vase rules.
But both sides’ legs were heavy, and chances were few and far between in extra time. In the only real sight of goal in the first period, Liam Turner met Robert Mulonea’s cross but saw his effort saved at point blank range by Whitcombe.
And the sides looked destined to meet again on Wednesday until Luke Richards was brought down in the left channel, and Ramsey-Dickson did the rest from Seal’s resulting free kick to spark jubilation amongst Hinckley players and fans alike.
Hinckley: Haydn Whitcombe, James Williams, Lee Thomas, Jack Farmer, Jamal Clarke, Peter Williams (Kristian Ramsey-Dickson 75), Sean Williams, Ryan Seal, Javia Roberts (Luke Richards 69), Paul Sullivan (Jacob Sturgess 105), Andy Westwood. Subs not used: Leadun Dunlevy, Tom Millington
Goals: Peter Williams (51), Kristian Ramsey-Dickson (113)
Quorn: Leighton Smith, Reece Medway, Joe Hopewell (James Hicks 77), Niall Mather, Josh Selway (Reuben Asamoah 62), Nathan Dale (Andrew Kenny 94), Robert Mulonea, Leavi Oshungbure, Simon Alcott, Liam Turner, Nick Goold. Subs not used: Ibrahim Kagbanga, Ryan Thacker
Goal: Jack Farmer (80 OG)
Attendance: 220