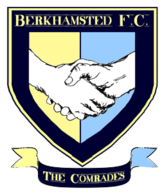 A stunning start saw Hinckley AFC net three times in the first nine minutes as they reached the last 16 of the Buildbase FA Vase with a 5-0 win over Berkhamsted at St John’s Park.

And an emphatic win was ensured after the break as Javia Roberts and Ryan Seal put the game beyond doubt.

Hinckley made three changes to the side that beat Heather St John’s on New Year’s Eve. Paul Sullivan was ruled out through the jarred knee he sustained in that game, while Darious Darkin and Peter Williams dropped to the bench. Ryan Paddock returned to partner Jamal Clarke at centre back, with Richards and Andy Westwood also coming back in.

AFC were on top from the very beginning, and although they had strong penalty shouts turned down less than a minute in when James Williams was tripped, those frustrations were banished just 90 seconds later. Butler stood over a free kick 20 yards out, and curled a fine effort right into the top corner.

That gave AFC the perfect start, but what followed was beyond the wildest dreams of even the most optimistic Hinckley fan. On seven minutes, a stunning team move, starting with Haydn Whitcombe in goal, saw play progress from back to front. Roberts was involved, setting up Lee Thomas to cross low to the edge of the six yard box. There, Richards made no mistake as he doubled his side’s lead.

And just two minutes later it was 3-0. Seal sent Richards through on goal, the striker rounding Comrades ‘keeper Carl Tasker, slotting into the empty net for his 50th Hinckley goal and sending the home supporters into jubilation.

Shellshocked by Hinckley’s start, only then did Berkhamsted start to settle into the game, but although they saw more of the ball Hinckley’s backline restricted them to half chances at best.

Indeed, it was AFC who had the better of the chances in the remainder of the first half. Clarke’s acrobatic effort sailed over, before Seal rounded Tasker but found the angle just too tight as he could only clip the outside of the post.

Seal then found himself through on goal again, but put his effort wide of the post when he should have made it 4-0.

The only real sight of goal Berkhamsted had before the break was when Ashley Lewis struck wide shortly before the half hour mark.

As the half reached its conclusion, Paddock headed powerfully over from Butler’s corner, before Butler himself saw another free kick tipped over by Tasker.

If Berkhamsted were to give themselves hope, they needed an early goal but Hinckley soon put any notion of a comeback to bed, netting a fourth two minutes after the break. Richards’ bustling run down the left ended with a low cross which The Comrades failed to clear. Seal had a sight of goal but was denied by Tasker, and the ball fell to Roberts inside the six yard box, who converted from a narrow angle.

And Seal made the win even more emphatic just after the hour mark. Tasker lost his footing inside the area, allowing Seal to run through on goal and slot home a fifth despite the best efforts of the recovering ‘keeper and a defender on the line.

Richards was then not far from securing his hat-trick, curling wide from the edge of the box, and it wasn’t until the last half hour that Berkhamsted had a chance of note. It came midway through the half, when Lewis got to the byline and pulled back to the edge of the box, where Ashton Campbell drilled wide.

Then, the visitors broke at pace through substitute Ikem Odeh, but he blazed over after working a good position on the right.

Whitcombe then had to be on hand to prevent Paddock slicing a wide free kick into his own net and Brad O’Donovan dragged wide as the visitors had the better of the late chances.

But that wasn’t to worry Hinckley, who had done the damage earlier in the game and reach the last 16 for the first time with an emphatic win over a side from the level above.