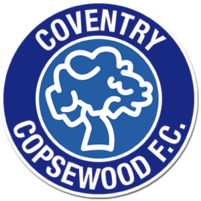 Hinckley AFC recorded a second away win on the bounce with a 5-0 victory over Coventry Copsewood at Allard Way.

Hinckley moved up to third in the league with a comprehensive win at Copsewood, and never looked like dropping points after Sean Williams gave them the lead shortly before half time.

And after Copsewood captain Craig Civzelis was sent off, Hinckley took full advantage after the break. Jake Healy added a second, while Steve Hart’s brace and George Bowerman’s late strike turned it into an emphatic scoreline.

With a number of his squad still suffering from injuries, Carl Abbott made two changes to his Hinckley side that beat Uttoxeter Town on Tuesday. Healy started in place of Bowerman up front, while Alex Morris partnered Mitchell Tomlinson at centre half.

For large spells, Hinckley looked the more likely to score during the first half but it was a well contested 45 minutes and the sides looked like going in level at the break.

That was until Williams’ moment of magic opened the scoring on the stroke of half time, finding half a yard of space 25 yards out from which he found the bottom corner.

There was still time for more action before the half’s conclusion, and Williams was involved again. The winger was brought down by Civzelis’ strong two footed challenge, and the Copsewood skipper was sent for an early bath.

The second half, though, saw Hinckley dominate from the re-start and they took full advantage of playing against ten men. Straight from the kick off, the visitors doubled their lead. Hart found space down the right and delivered a pinpoint cross from which Healy nodded home.

And with Copsewood tiring, Hinckley capitalised and Hart made it three with a clever goal midway through the second half. A quick free kick released the striker one on one with Dale O’Donnell, and Hart’s neat chip found the back of the net and opened his account for the club.

Not content with that, a ruthless Hinckley continued to search for goals and got another reward for their efforts late on when Bowerman, voted August’s Player of the Month last week, made it five. Hart and Isaac Cooper linked up well down the left, and Bowerman buried the chance to round off a fine away performance from Abbott’s side ahead of another next week at Cadbury Athletic.