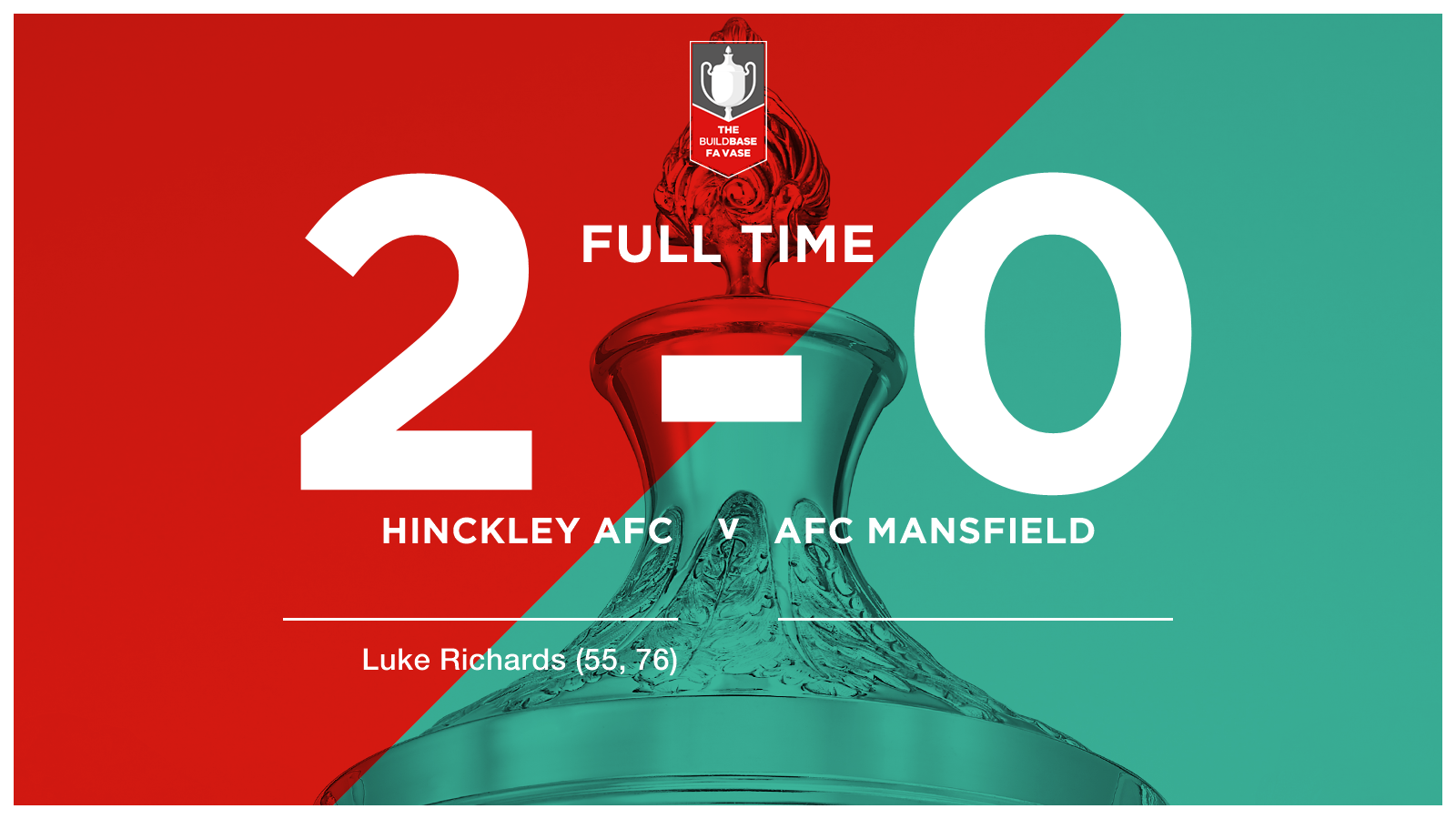 It may not have the same reputation as the FA Cup, but the FA Vase still conjures up its magic moments.
Not many would have given Hinckley AFC a chance against an AFC Mansfield side who had lost just once in 16 league games at a level higher than Hinckley in the non-league pyramid.
But Luke Richards’ second half brace upset the odds at St John’s Park and earned Dale Belford’s side a place in the third round for the second straight year.
It was a thoroughly deserved win for Hinckley, who went in level at break after Mansfield edged the first half, before Richards’ double secured progression.
Belford made one change to his Hinckley side that beat Leicester Road last week. Josh Willis was cup tied, having played for Atherstone earlier in the competition, so Mitchell Tomlinson came in.
And while the visitors had more of the ball in the first half, chances were few and far between at either end. James Ghaichem struck wide with the visitors’ first chance, while Richard Lavery’s powerful downward header for Hinckley was wide of Jason White’s far post.
But while there was plenty of endeavour from both sides, it was mostly in the middle of the park and neither goalkeeper was troubled much in the opening stages. Mansfield were neat in possession, but evidently missed their suspended top scorer Ollie Fearon.
As Mansfield started to get hold of the ball more, Nicholas Guest knocked comfortably wide with a cross-shot, before Connor Smythe turned Tomlinson but found his effort dealt with by Ty Belford.
Then, Philip Buxton fired over from the edge of the box as Hinckley got to the half hour mark unscathed.
As the game opened up before the break, Richards twice went close for Hinckley and Jake Healy saw a shot blocked while, at the other end, Belford misjudged the flight of a corner and Guest could only fire over from six yards when he should have put the visitors ahead.
Then, on the stroke of half time, Cameron Dear fired over from range as the sides went into the break on level pegging.
The visitors had the first chance after the interval, when Jon D’Laryea half volleyed wide from 20 yards, but it was Hinckley who opened the scoring ten minutes into the second half. Good work by Healy and Bekir Halil found Steve Hart, whose delicious cross was met by a looping header from Richards as he found the top corner with White beaten.
With Mansfield still regrouping after the goal, Richards and Hart both had shots blocked soon after, but the visitors responded brightly without threatening the Hinckley goal.
That was until Belford pushed over from Smythe on 68 minutes, and four minutes later had to make a stunning save to keep Hinckley ahead. Lynton Karkach’s shot from the right took a wicked deflection, and Belford produced a fine save to prevent an equaliser.
And three minutes later, that save was to prove crucial when Hinckley went up the other end and doubled their lead. Magnificent build up play involving Halil and Hart saw a one-two on the edge of the box, before a cross for Richards to slam home his second from six yards.
That put the home faithful in jubilant mood as their dreams of an upset became reality. Mansfield had plenty of pressure in the closing stages as they fought for their place in the competition, but Hinckley defended resolutely and were led superbly by Lavery.
The Bulls’ only chance came when Karkach was brought down on the edge of the box, but Belford comfortably dealt with the resulting free kick.
And Hinckley held on for a fine win that ensures their name will be in the hat for the third round draw on Monday.
Hinckley: Ty Belford, Mitchell Tomlinson, Dominic Perkins, James Williams, Richard Lavery, Marcus Jackson, Isaac Cooper, Bekir Halil, Luke Richards, Steve Hart, Jake Healy (Lamar Graham 69). Subs not used: Kevin Thornton, Kyle Minto, Ben Rad, Chad Timson
Goals: Luke Richards (55, 76)
Mansfield: Jason White, Liam Marsden, Connor Smythe, Jon D’Laryea, Jordan Annabelle, Bradley McDonald, James Ghaichem, Philip Buxton, Nicholas Guest (Michael Jones 69), Craig Mitchell (Lynton Karkach 57), Cameron Dear. Subs not used: Mark Dudley, Jordan Smikle, Mark Ward
Attendance: 172