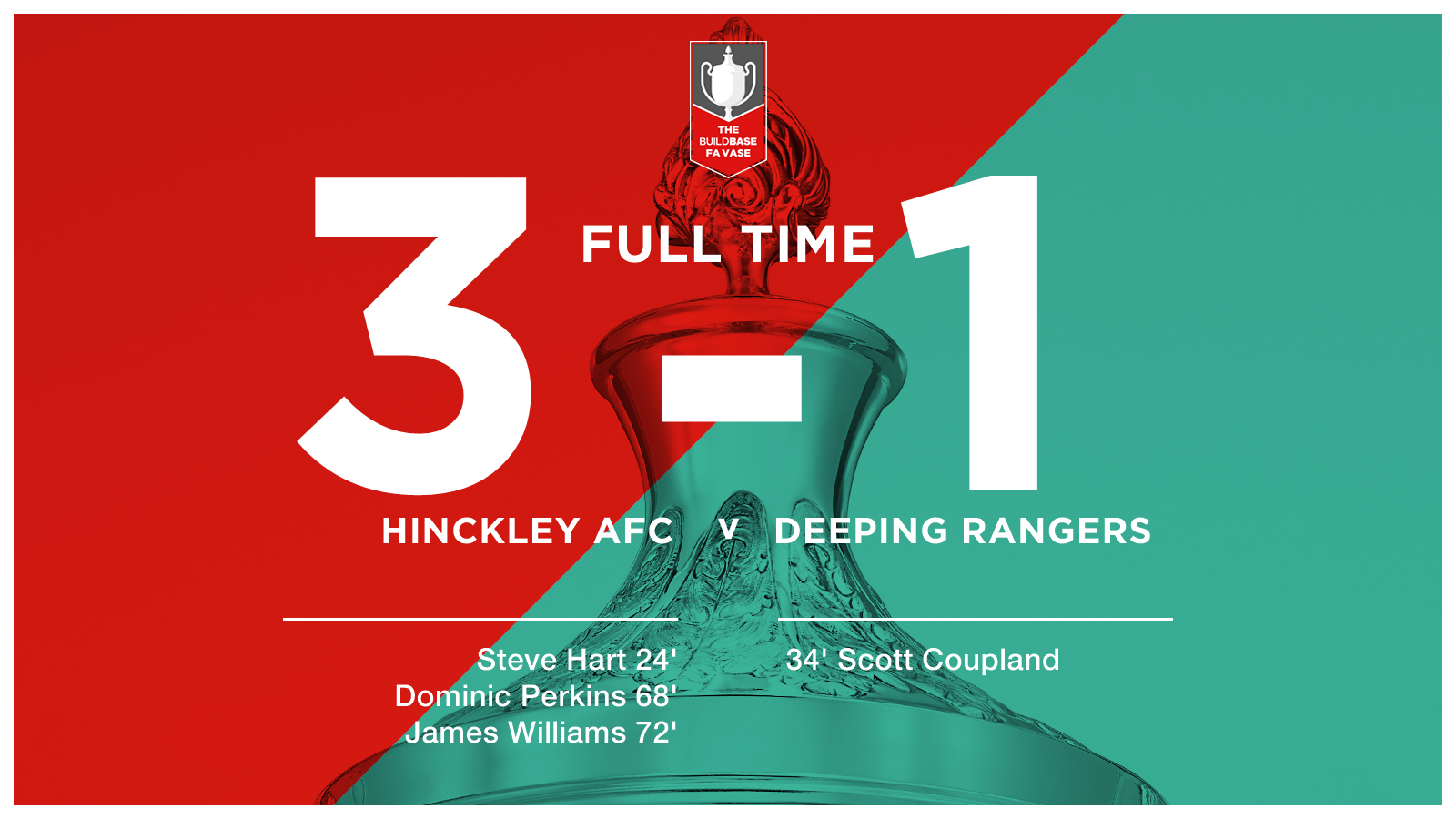 Hinckley AFC reached the fourth round of the FA Vase for a second straight year with a 3-1 win over Deeping Rangers at St John’s Park.
For the second round in a row, Hinckley overturned a high flying side from a level above their own as they knocked out the United Counties League’s fifth placed side.
Steve Hart’s opener put Hinckley ahead midway through the first half, but Deeping pulled level shortly afterwards through Scott Coupland.
And with the game all to play for after half time, two quickfire headers from defenders Dominic Perkins and James Williams saw Hinckley through with their sixth consecutive win.
Manager Dale Belford made three changes to the side that beat Brocton last week. In came Asa Wright, for just his second start of the season, alongside Bekir Halil and Jake Healy.
It was Hinckley who started the brighter, and Luke Richards had a well-struck shot blocked before 30 seconds had been played, but Deeping settled well and took control of the midfield as they did so.
Henry Dunn headed wide with their first half chance, before a neatly worked free kick down the right led to Scott Mooney firing wide at the far post from Daniel Flack’s low cross.
But just as Deeping started to gain a real stronghold, Hinckley hit them with a sucker punch at the other end. Marcus Jackson’s lofted ball found Hart with his back to goal on the angle just inside the box. Not to be deterred, Hart danced his way past defenders and into a pocket of space 12 yards out, from which he found the bottom corner with a precise effort which Richard Stainsby’s dive couldn’t keep out.
Deeping nearly hit back straight away when Wright conceded possession in midfield, but Mooney couldn’t capitalise and Hinckley recovered well to clear.
Then, Cooper’s long range strike flew just over in Hinckley’s closest effort to a second goal, but in truth Deeping didn’t deserve to be behind and they restored parity 11 minutes before the break. It was, though, a goal of Hinckley’s own doing. Halil was caught in possession on halfway, allowing Deeping to break at pace. From the right channel, Mooney’s cross found Charlie Coulson. He was denied by Ty Belford’s point blank save, but the rebound fell straight to Coupland who had time to find the bottom corner from barely a yard out.
As the half drew to a close under thickening fog, Mooney dragged off target after another neat move down Deeping’s right, and Daniel Schiavi’s shot on the half turn was deflected wide.
But the final chance of the half fell Hinckley’s way, as Healy’s sweetly-struck half volley flew over from 20 yards. That was to be Healy’s last action as he was replaced by Kevin Thornton at the break.
After half time, Hinckley were more compact and Deeping’s chances were relatively few and far between as a result. That said, just four minutes had passed when they broke at pace from a Hinckley set piece. Schiavi found Coupland, who was denied by a combination of Belford and Cooper.
Schiavi then had a speculative free kick saved, but Hinckley then started to have the better of the chances and Jackson’s angled drive was spilled by Stainsby in their first effort of the half.
Belford comfortably saved twice from long range efforts, but Hinckley were on top by this point and Hart flashed inches wide from Jackson’s cross as they went close to re-taking the lead.
And they did exactly that midway through the half. Cooper’s long throw was flicked goalbound by Perkins, but Stainsby looked to have tipped it over the bar. The ball, though, almost rolled along the crossbar before dipping below it and inside the far corner.
Hinckley weren’t finished there, and after Stainsby denied Cooper’s cross when it was missed by a defender, they extended their lead four minutes later. Cooper was the creator again, a wicked delivery from a wide free kick met by Williams, who gave Stainsby no chance with a fine precise header back across goal which nestled in the corner.
Even with a two goal cushion, Hinckley continued to have the better of the chances. Hart and Thornton combined superbly with 15 minutes to play, brilliant feet by Thornton allowing him the space to shoot across goal, Stainsby parrying just out of Richards’ reach.
As Deeping threw men forward in an attempt to salvage their Vase run, Mooney and Coupland both failed to test Belford before substitute Louis Hamilton did likewise.
As the game ticked into stoppage time, Hinckley knew they were heading through to the next round and Hart nearly added a fourth in time added on, hitting the post when one-on-one.
Not that that miss, nor the gloomy conditions, dampened Hinckley’s celebration at full time, as Belford’s side recorded their sixth win on the bounce and ensure it is they who are in the hat for the fourth round draw on Monday.
Hinckley: Ty Belford, James Williams, Dominic Perkins, Jake Healy (Kevin Thornton 46), Richard Lavery, Asa Wright, Isaac Cooper, Bekir Halil, Luke Richards, Steve Hart, Marcus Jackson. Subs not used: Mitchell Tomlinson, Lamar Graham, Ben Rad, Chad Timson
Goals: Steve Hart (24), Dominic Perkins (68), James Williams (72)
Deeping: Richard Stainsby, Daniel Flack, Tom Smith (Jason Kilbride 75), David Burton-Jones (Louis Hamilton 59), Luke Hunnings, Jonny Clay, Henry Dunn (Michael Simpson 79), Charlie Coulson, Scott Mooney, Scott Coupland, Daniel Schiavi. Subs not used: Chris Hollist, Danny Bircham
Goal: Scott Coupland (34)
Attendance: 193