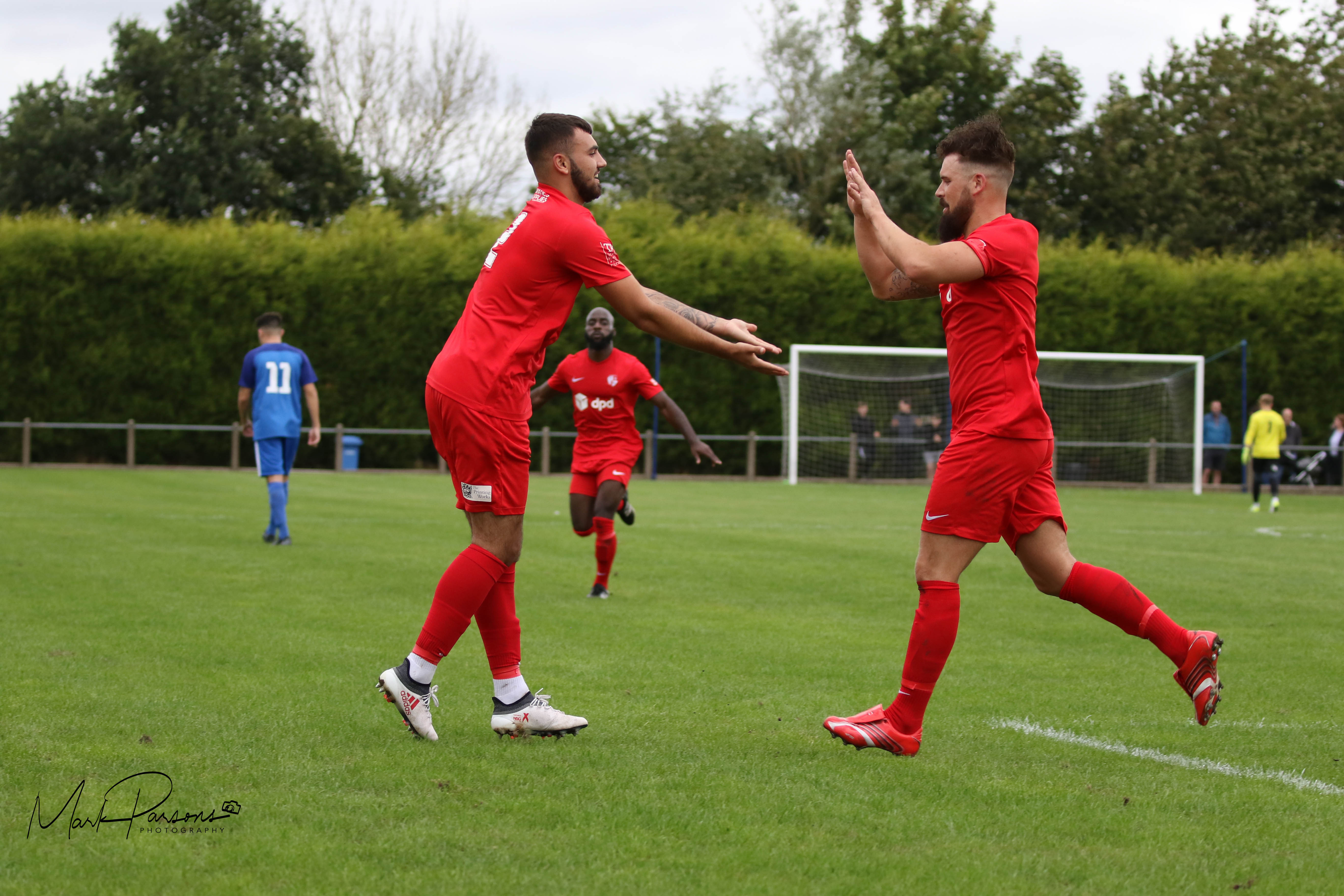 Hinckley AFC ended Heather St John’s’ 100% record but had to settle for a point in an entertaining 2-2 draw at St John’s Park.

Before the game, it was about which record would be lost with unbeaten Hinckley taking on their former landlords who had won every game so far.

Hinckley led twice during the first half courtesy of Grant Ryan and Kieran Harrison, but on both occasions Heather hit back – first through Daniel Douglas and then Chris Lloyd.

And, despite Hinckley hitting the bar twice, neither side could find the elusive winner during the second half as the spoils were shared.

James Jepson made one change to his Hinckley side that beat Nuneaton Griff on Wednesday, Steve Chaplin starting in place of Sam Belcher.

And the visitors broke the deadlock with the first chance of the game nine minutes in. It was a route one goal, Toby Moore’s long ball flicked on well by Chaplin for Ryan to run on and finish – despite Tom McNulty getting a strong hand to the ball.

It was Ryan’s fifth goal in six games – the perfect start for AFC as they sought back-to-back wins, and they nearly doubled their lead four minutes later. It was a good move with a scrappy ending, play switched from left to right as a cross eventually fell to Mahmoud Juma, who saw his initial effort blocked before bending the rebound inches wide.

But Heather then started to gain more of a foothold and, like Hinckley, scored with their first chance. It was a goal Hinckley would have been disappointed to concede, Tom Weale’s long throw causing confusion and Douglas left with the simple task of netting from close range.

A minute later, Adam Harrison was called into action for the first time to hold Michael Wright’s effort after Weale freed Lloyd down the right.

The sides then exchanged half chances as neither really gained a stronghold, Moore’s good defending denying Lloyd an effort at goal, before Jason Lee struck wide from long range.

Much of the play was in midfield, but Hinckley were moving the ball neatly at times – even though it was a set piece that brought their second goal eight minutes before the break. Tom Maddison’s wide free kick was met by Harrison’s powerful header, the defender netting for the second time in two games at the far post.

Again, they had a chance to extend their lead not long after, but the bounce from Chaplin’s fine header wasn’t kind to Ryan and the striker couldn’t get it under control, Scott Rickards denying him a shot on goal.

But just as Hinckley were looking to take their lead into half time, Heather hit back again. It was a goal from nothing, a Hinckley free kick falling to Weale on the edge of his own box. Weale belted a ball into the left channel for Lloyd to run on to, the forward somehow left in acres of space to bear down on goal and finish coolly.

It meant the game was all to play for after the break, but Heather came out well and nearly scored within a minute. The hosts broke through Chris Cowley down their left, Cowley pulling a cross back for Wright to be denied by Harrison’s smart save.

But still, neither side could gain a real ascendancy and they almost shared chances blow for blow – Harrison having a header held by McNulty for AFC, before Cowley drove forward for Heather before firing not far over.

The home side introduced the league’s top scorer Simeon Cobourne with 20 minutes to play, and he immediately posed a threat, but it was from a corner that they came closest to finding a winner – Douglas’ header denied by Harrison’s fingertip save.

Cobourne fired over with his best sight of goal after being set up by Fraser Doyle, but it was Hinckley who came closest in the final five minutes.

They struck the woodwork twice in the closing stages as they came within inches of back-to-back wins. First, Chaplin and Ryan linked up well again, the former feeding the latter, who shot on the turn and saw his effort strike the bar.

And moments later it was deja vu, Belcher’s effort from range spilled onto the bar by McNulty, who made amends by denying Louis Hamilton’s follow up effort.

It wasn’t quite to be for Hinckley, and after Moore’s good defending denied Cobourne a shot in the game’s final attack, the sides took a point apiece to ensure that both remain unbeaten.