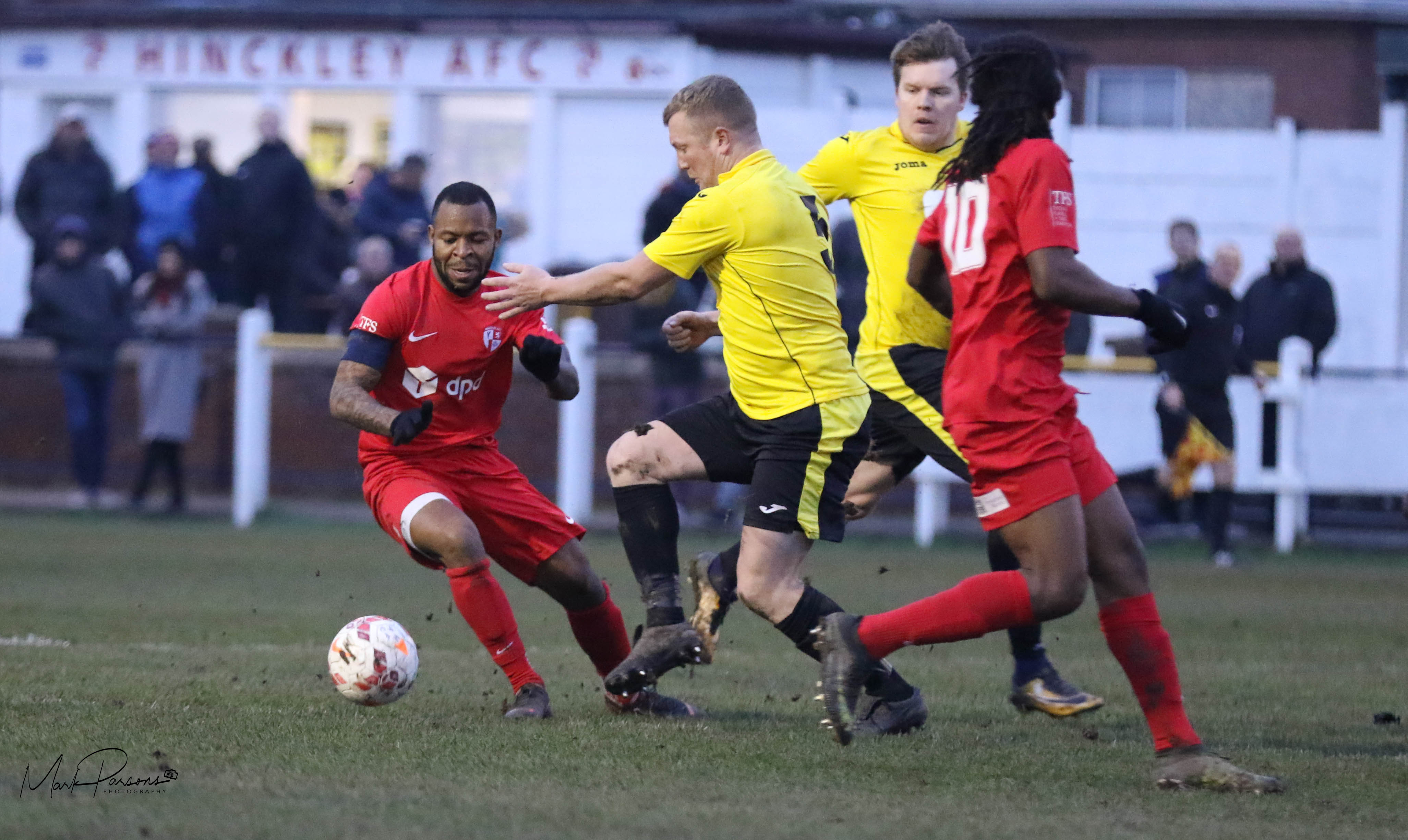 AFC were chasing the game at half time as Simeon Cobourne and Joe McNulty put the visitors two up.

But Hinckley pulled one back through Louis Hamilton and Heather were indebted to goalkeeper Billy Spink for an outstanding save which kept the scores level.

And they took full advantage of that, netting three late goals to add gloss to the scoreline.

The result, however, was largely insignificant compared to the health of a Hinckley supporter, who was taken away in an ambulance as the game was halted for half an hour.

John Ramshaw made four changes to his Hinckley side beaten by Atherstone 11 days ago. Ryan Murphy, Alando Lewis and David Jones all made their first starts, while Chris Hollist returned at left back.

Hinckley were, though, without the injured Sam Belcher who missed out after being bitten on the leg by a dog on Christmas Eve.

And they missed his influence on the midfield in the early stages as Heather started well, their first effort coming from a Tom Weale long throw. These proved problematic for Hinckley all afternoon, their problems nearly foretold when Weale launched one into the box and Chris Cowley nearly took advantage of a knock down, but George Warren saved.

Hinckley then forced the game’s first corner, when Hollist’s effort was deflected wide, when the game was suspended for half an hour as the ambulance was called to attend to the ill supporter, to whom we send our very best wishes.

The game restarted half an hour later, and from that corner Heather broke but the ever-lively and threatening Cobourne flashed across the face of goal.

The sides continued to exchange efforts on goal but Heather’s were regularly more threatening as Hinckley were lacking in the final third. Jones couldn’t get enough on a header from Hamilton’s cross before, at the other end, another long throw caused problems and Dean Rathbone struck the base of the post.

All that happened within the first ten minutes of play in a frantic start, before Hinckley’s best chance of the half came when a neat move saw Hamilton send Murphy through on goal, but his touch was a fraction heavy and Spink rushed out quickly to deny him.

Lewis then forced Spink into routine action with a scuffed effort as the game remained goalless after its first 20 minutes.

Ramshaw has lamented his side’s defensive errors costing them dear in recent weeks, and this game was no different. Heather took full advantage of Hinckley overplaying in their own half, and Cobourne was sent through on goal as he made no mistake by beating Warren one-on-one.

Hinckley responded well, and Hollist was a threat again down the left immediately after the restart as he pulled back but Jones was crowded out before pulling the trigger.

Spink, th0ugh, was rarely called into action in the first half as the visitors defended well, and they finished the period the stronger.

Rathbone showed good feet to create half a yard before firing a sweet strike just over, before Cobourne rounded Warren but was forced wide by the ‘keeper, who recovered in time to save the resulting shot.

And they made their advantage count with a second on the stroke of half time, when McNulty was allowed a free header from a wide free kick to power home a second.

It left Hinckley with a mountain to climb in the second half against the league’s top side, but they took their first steps in scaling it with a bright start to the half.

Their bright start wasn’t without another long throw causing problems though, Warren clawing away Chris Cowley’s effort as another Weale hurl wasn’t dealt with, but AFC pulled one back five minutes into the half.

Hollist provided the spark down the left again, beating two men to get to the byline and pulling back for the arriving Hamilton to side foot a cool finish into the corner from 15 yards and give the hosts hope.

After another long throw was scrambled clear, AFC continued to have the better of the second half and Tyrone Burton had an effort blocked from a corner.

Then, from a deep free kick, Murphy headed goalbound but was denied by an outstanding fingertip save by Spink who managed to turn the ball over the bar.

That proved a crucial moment in the game and Heather reacted well after that, coming close shortly afterwards when Cobourne was denied by Jason Lee’s good block.

Not to be denied for much longer, the league’s leading scorers restored their two goal lead when Rathbone’s free kick forced a good save from Warren, but Hinckley were slow to react and Josh Willis slid home the rebound.

In truth, that killed Hinckley off and Cowley then came close to adding a fourth as he poked narrowly wide.

With 15 minutes left, had the stretching Lewis arrived a fraction earlier and managed to divert Hollist’s cross home it could have been an interesting finish.

But as it was, the cross just evaded the onrushing striker and the scoreline didn’t end as close as the game had been for large spells – especially after Lewis worked space well but fired wide at the near post.

And Heather added two goals in the final eight minutes to cement their place at the top, Cobourne capitalising when Hinckley were caught in possession again and rifling a fourth into the top corner.

And Cobourne was at the heart of their fifth again moments later, driving forward down the left and drilling a low cross into the box, where Callum Willimont diverted into his own net.

And in their final game of 2018, Hinckley were condemned to their heaviest defeat since the first game of 2018 at Marske United.

Ramshaw’s men will look to start 2019 in better fashion when Stapenhill are the visitors a week on Saturday.