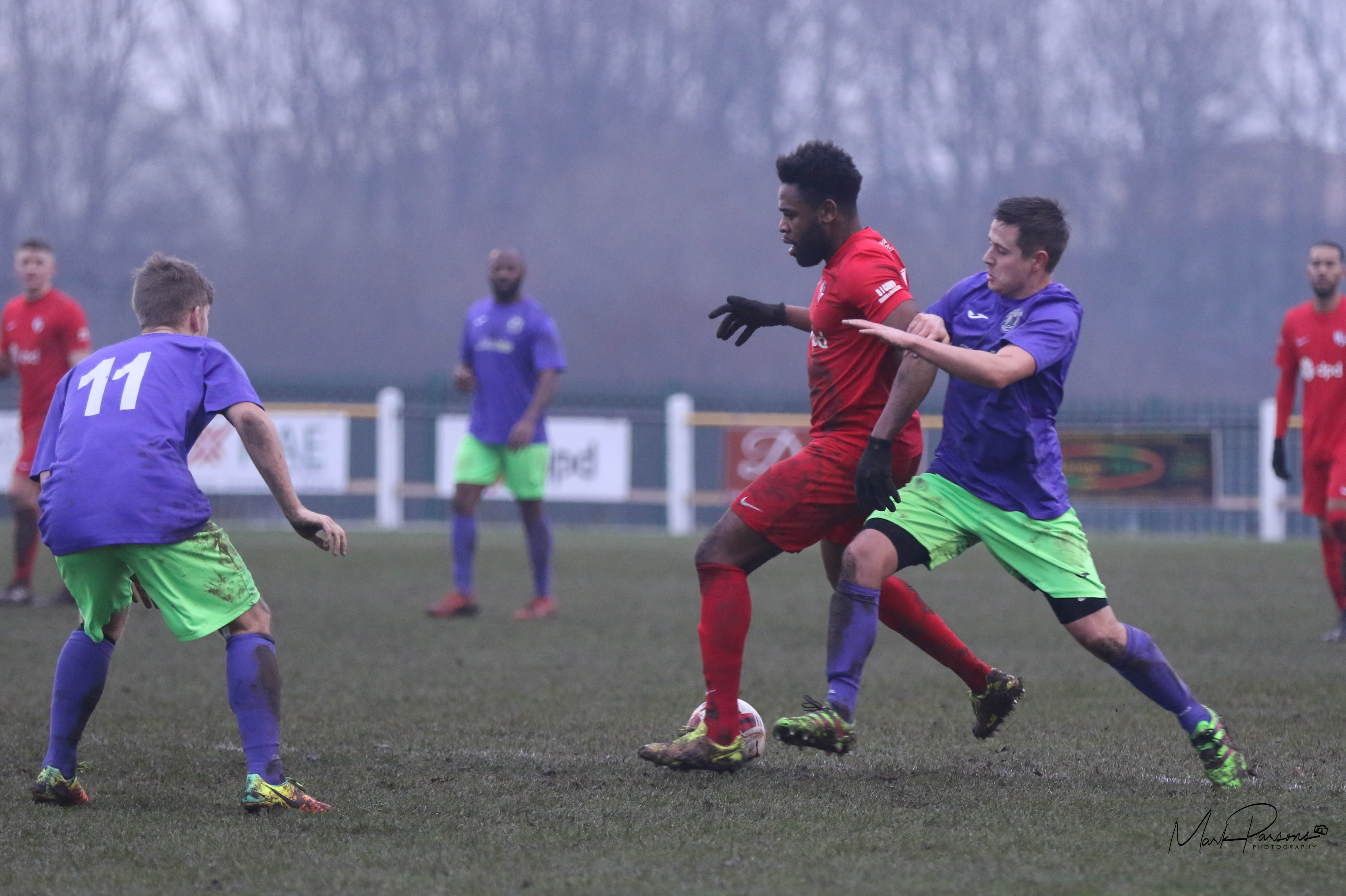 Hinckley AFC threw away a two-goal half time lead as Chelmsley Town hit five in the second half at the Welfare Ground.

All looked rosy for AFC at the break as Callum Willimont’s first for the club and Sam Belcher’s header gave them a comfortable lead at the midway point.

But a shambolic second half defensively saw a catalogue of errors which allowed the visitors to score five times and take what had looked an unlikely win.

Manager John Ramshaw made just one change to his Hinckley side which looked largely solid during Tuesday’s 1-1 draw with Nuneaton Griff, with Alando Lewis replacing David Jones up front.

And for the first 45 minutes, it was a competitive game which Hinckley had the better of. Ten minutes had passed when they had their first chance, when Louis Hamilton went through on goal but checked back to come inside a recovering defender, who blocked his shot.

Chelmsley hit back with a chance of their own as Nathaniel Lewars dragged wide of the far post, before AFC opened the scoring on 17 minutes. The visiting defence failed to clear a corner, and Willimont fired a sweet strike into the top corner to open his account for the club.

Then, visiting ‘keeper Peter Maguire blocked bravely from Chris Hollist after good link-up play between Lewis and Grant Ryan, before Belcher was at the heart of a good team move which ended with him pulling back into the area, where nobody could apply a finish.

Chelmsley threatened an equaliser through Danny Brain, who called Yinka Adebowale into action for the first time with a well-struck shot, before Hinckley doubled their lead seven minutes before half time.

It came from the head of Belcher, who met Ryan’s cross with a looping effort which dropped over Maguire and extended Hinckley’s advantage.

It should have set AFC on the way to a second home win of 2019, but instead the positives of the first 45 minutes were a distant memory compared to what was to follow.

The visitors brought on Ryan Conlon at the break in the hope of getting back into the game and immediately looked brighter for it – but they were given a huge helping hand by Hinckley’s mistakes.

Four minutes into the half it was 2-1, a long throw causing confusion and leading to Belcher’s clearance ricocheting off Hollist and rebounding into the net to give the visitors the boost they were after.

And that was a sign of things to come as they erased the deficit two minutes later, Conlon repaying his manager’s faith when he ran onto Maguire’s launched clearance, in behind a static back line to slot home and level.

Just before the hour, it seemed that have given Hinckley the kick up the backside they needed when they restored their lead. Chad Timson floated in a right wing cross, and Ryan rose highest to head home and give Hinckley the advantage again.

But again, it didn’t last – and just two minutes later Chelmsley scored for the third time in 12 minutes through another bizarre goal. Steve Sadler’s free kick from just inside the Hinckley half should have been innocuous, but no Hinckley player dealt with it and it sailed over everyone and into the back of the net.

After the manic first 15 minutes to start the second half, the game settled slightly after that and Hinckley didn’t threaten until a quarter of an hour later when Jean Dakouri hit one wide after a spell of pressure.

At this point, Hinckley looked the more likely winners and they should have taken the lead again with seven minutes to play. It was a golden chance, but Ryan, through on goal, struck the outside of the post and Chelmsley breathed a huge sigh of relief.

And in a game on fine margins, that cost Hinckley in stoppage time. The game was just into time added on when Brain put Chelmsley ahead for the first time from the edge of the box.

And with AFC chasing an equaliser, they sealed a dramatic win when Conlon ran from the halfway line to score his second of the game and wrap up a miserable 45 minutes for Hinckley.