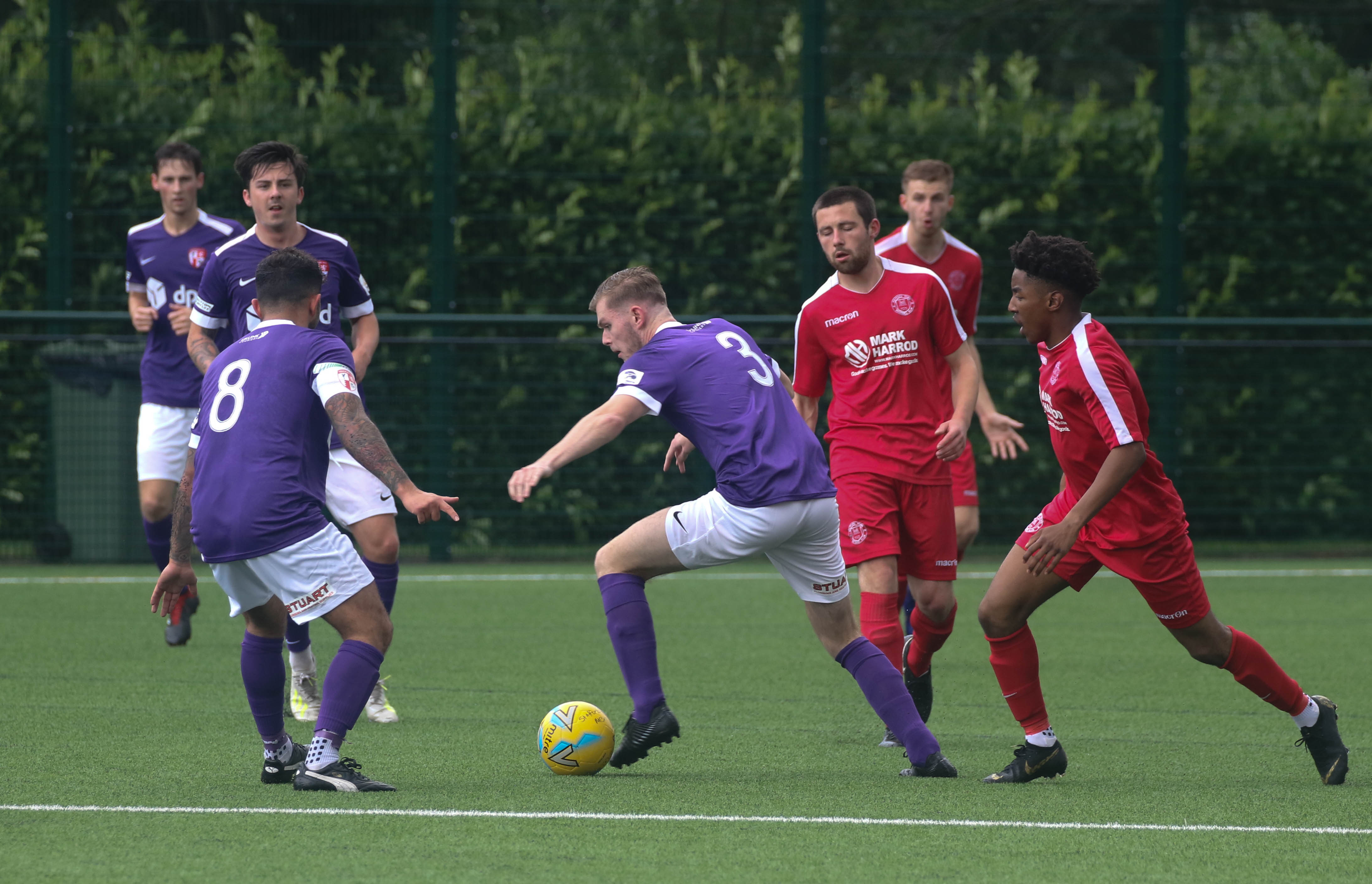 Hinckley AFC dropped points for the first time this season as Stafford Town scored twice in the final ten minutes to snatch victory at Evans Park.

AFC let a half time lead slip in the dying moments as they were punished by their hosts for a lacklustre display, particularly after half time at which point Ky Green’s header had put them ahead.

But Stafford hit back late on, and substitute Lenny Baker slotted home two almost identical goals to condemn Hinckley to their first defeat under Courtney Belford.

Belford was forced into two changes from the side that beat Coventry Copsewood on Tuesday. Ryan Ball (holiday) and George Brindley (injured) both dropped out, while Hinckley were also without Mark Williams (working) and Jake Healy (injured).

It meant Chad Timson and Lewis Commins both came in for their first appearances of the season.

And, kicking into the gale force wind in the first half, Hinckley should have taken the lead after just two minutes. From Curtis Townley’s long throw, Commins hit the post through the crowded box and Michael Wright blazed the rebound over from six yards when he should have netted his second goal in two games.

Townley then nodded Sam Reuben’s corner over the bar before Hinckley took the lead midway through the half. From a Hinckley free kick on the corner of the box, Luke Delaney’s fine delivery was glanced home by Green as he headed his side into the lead.

Both sides continued to try and play despite the howling wind and occasional heavy showers, but conditions weren’t conducive to free-flowing football and real chances were few and far between.

Hinckley continued to have the better of the play though, and Commins’ pull back into the six yard box was cleared before his deflected shot fell to Alex Lock, who drove over from the edge of the box.

In between those efforts, Stafford’s only shot on target of the half came when Joe Shanley found Okona Kulisena, as Phil Smith saved at the near post and Hinckley took their lead into the break.

But after half time, Hinckley didn’t use the wind to their advantage and they too often surrendered possession too easily.

That said, they still had the better of the chances – and after Delaney curled wide, Luke Richards raced through one-on-one but slotted wide from a chance he would usually have pounced on.

At the other end Shanley fired over after a corner but Hinckley, despite inviting pressure, weren’t looking too threatened.

They continued to create chances, Wright firing tamely at Josh Moreton after Delaney’s pinpoint pass, before he turned provider and set up Richards 12 yards out, whose similarly soft effort was comfortably saved.

But as the half wore on, Stafford began to apply more pressure on the Hinckley door. The sides exchanged good chances when Smith had to save Shanley’s follow up header when Kulisena’s cross clipped the bar, while Bekir Halil ballooned over from eight yards after the hosts failed to clear a free kick.

And, having not taken their chances, Hinckley were made to pay as the game entered its final ten minutes. Townley misjudged a long ball which caught on the wind, allowing Sam Jessup to get to the byline and pull back into the box where Baker side-footed home from the edge of the box to level just three minutes after coming on.

After that, Hinckley couldn’t fashion the chances to threaten the home side’s lead and Belford’s side suffered their first defeat of the new campaign.