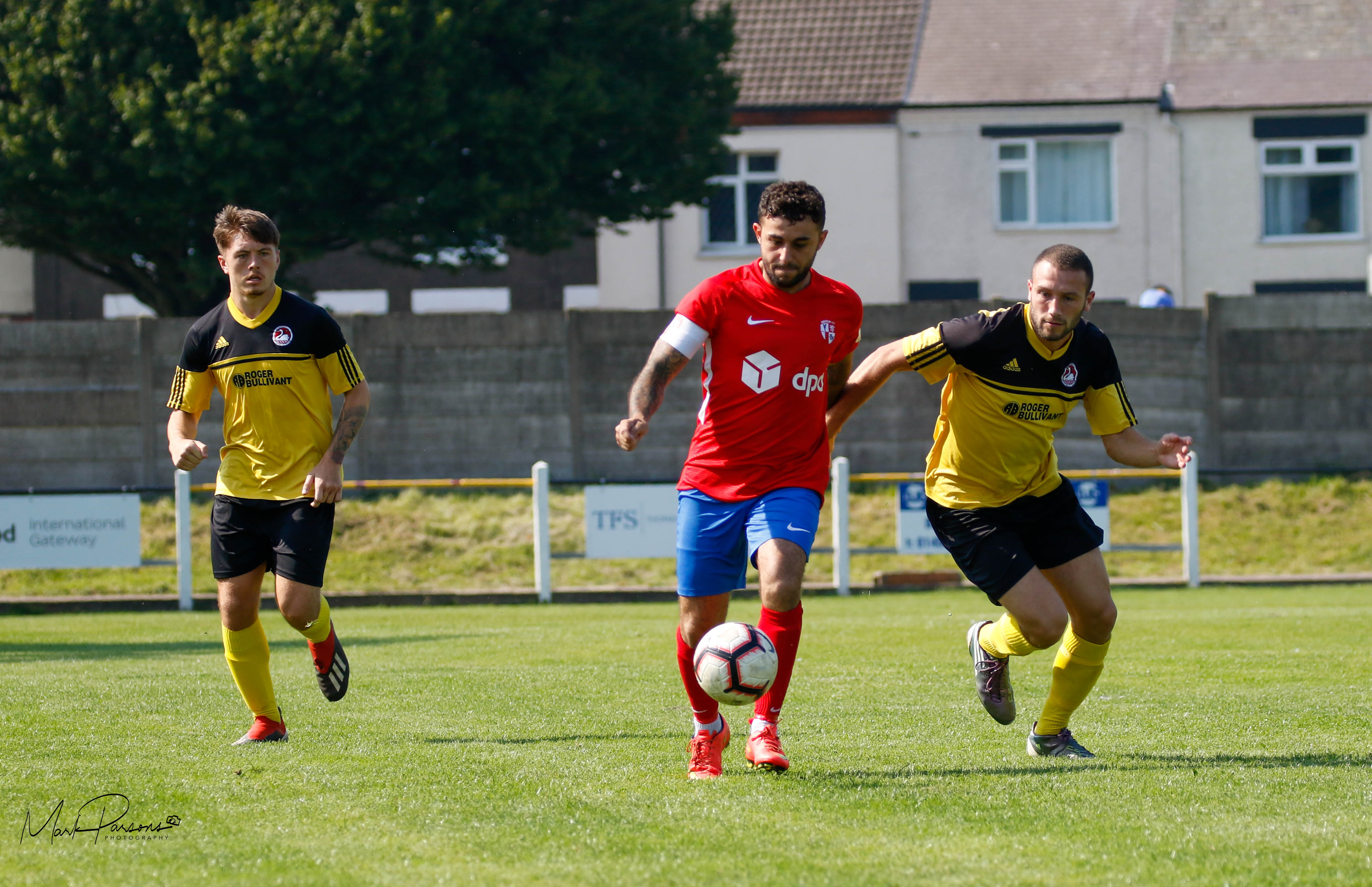 Hinckley AFC lost their 100% home record this season as Stapenhill picked up their third straight victory in a 3-1 win at the Welfare Ground.

The damage was done by half time as Hinckley, not at the races during the opening 45 minutes, trailed 3-0 at the break courtesy of Callum Riddell, Ben Humphreys and Cameron Steele.

And though they improved after half time, Hinckley’s only goal came through Jake Brown as they slipped to a second defeat of the season.

Courtney Belford made one change to his Hinckley side that beat Ashby Ivanhoe on Saturday, as Dimitri Dunkley’s work commitments ruled him out and Jake Healy returned.

On a hot Bank Holiday afternoon, the tempo was slower than usual as a result and Stapenhill took the lead with the game’s first chance after 12 minutes. It was a well-worked goal, a neat move down the left which Riddell finished neatly from 12 yards.

The game was half an hour old by the time Hinckley threatened the visitors’ goal – Ky Green’s header from Bekir Halil’s corner was deflected over, and from the resulting set piece Luke Richards fizzed an effort which skimmed the bar.

But just as Hinckley made their first knocks at the Stapenhill door, they were hit by the visitors’ second two minutes later. From a wide free kick, Riddell got a flick at the near post and the onrushing and unmarked Humphreys slammed home from close range to double their lead.

Hinckley were uncharacteristically shaky defensively having kept three clean sheets previously and the visitors took full advantage with a third seven minutes before the break. Hinckley were caught in possession on halfway, and a quick switch of play set Steele bearing down on goal as he made no mistake.

It could even have been four by half time, but a ricocheted effort struck Steele and clipped the outside of the post with Ty Belford wrong-footed.

That gave Hinckley a mountain to climb, but they came out much sharper after the break and set about scaling their task.

Substitute Sam Reuben’s cross was headed over by Richards, Halil put a free kick too high and Richards’ blazed off target after a storming run as Hinckley sought the goal that would get them back into the game.

But while they had more possession and territory in the second half, visiting goalkeeper Paul Hollis wasn’t called into much other than routine work such as when he held Richards’ fine cross with Lewis Commins looming.

That was testament to their well-organised defence while they also remained a threat on the break, particularly through the speedy Steele on the right. He had a chance for a second in similar circumstances to his first, but a combination of the retreating Ashley Gray and Belford standing strong denied him.

The second half was played at a fast pace considering the heat, and AFC should have pulled one back just after the hour but Michael Wright blazed over in the box when Commins was unmarked square of him.

At the other end, Belford saved from Riddell and Ryan Pearce but Hinckley resumed their pressure through Gray’s header saved and Ryan Ball volleying over.

But time was running out. With 15 minutes left, Wright fired an angled one-on-one straight at Hollis when Commins was waiting in space again and that looked like Hinckley’s chance of saving the game had gone.

When Brown slid home his second in two games from the rebound after Halil’s free kick was tipped onto the post, it was too little, too late.

But Hinckley still believed, and should have had a second when a ball into the box was converted by Halil at the far post – yet he was adjudged to have been offside to Hinckley’s shock.

Halil then became the first Hinckley player to receive a temporary dismissal when he was sinbinned for his reaction, and once Commins volleyed another Hinckley chance narrowly wide that was that and Stapenhill had their win.