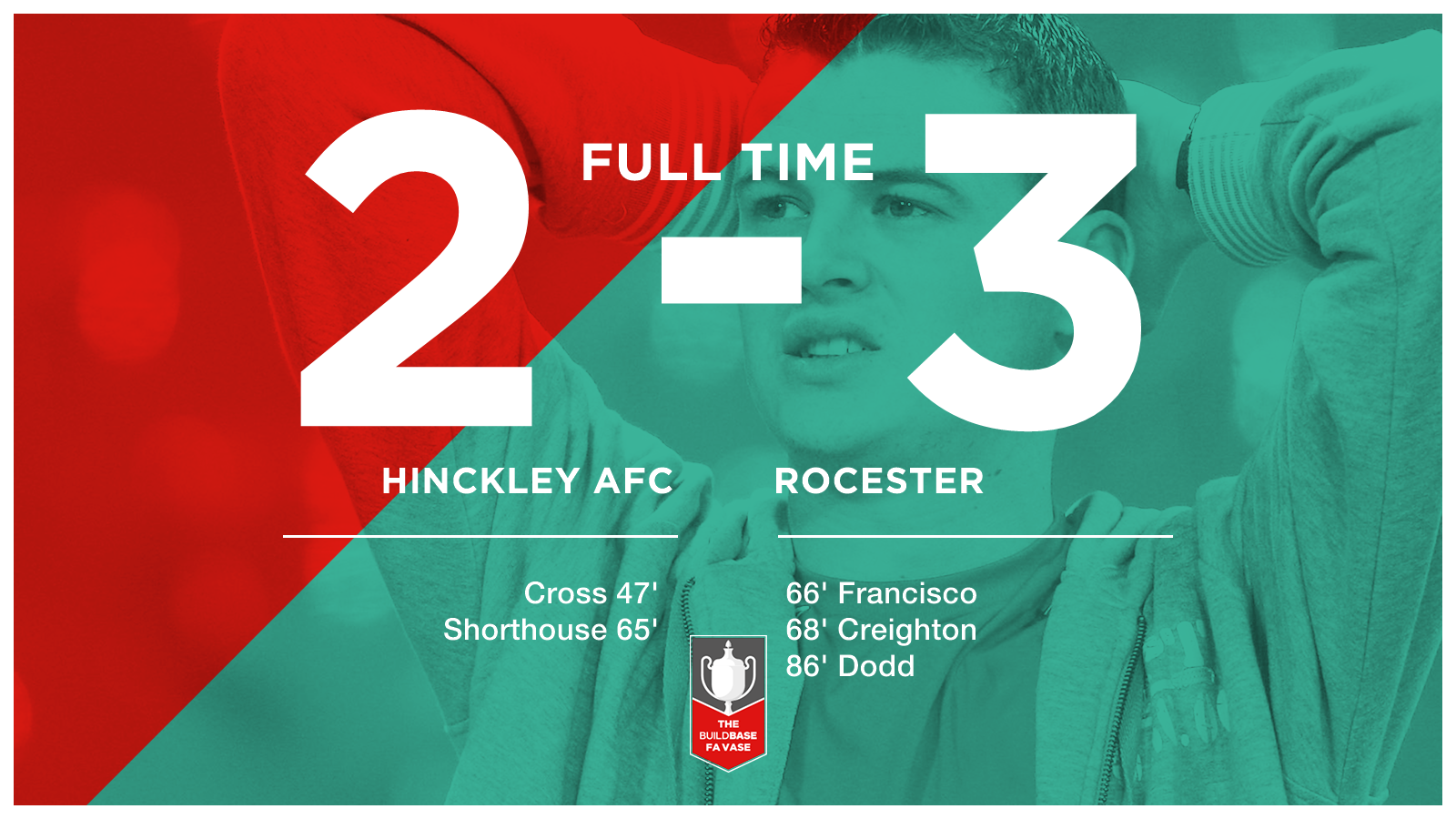 Hinckley AFC crashed out of the FA Vase as they surrendered a 2-0 lead to lose 3-2 at home to Rocester.

For the second week in a row, AFC fell victim to a late Jordon Dodd goal as the visitors completed a dramatic second half comeback.

Hinckley were two goals to the good midway through the second half thanks to Liam Cross’ first for the club and Luke Shorthouse’s debut goal.

But Elisio Francisco’s stunner and Derry Creighton’s leveller hauled the visitors back on terms, before Dodd settled the tie it with four minutes to go.

Courtney Belford made four changes to his side that lost at Rocester in the league last week. Regular centre backs Curtis Townley (ankle) and Ky Green (concussion) both missed out while Dimitri Dunkley was also unavailable. Ash Gray, Greb Webb and George Brindley returned while Shorthouse partnered Luke Richards up front on his debut.

It was a largely even first half, where both sides had chances to break the deadlock. Richards seemed to be reaping the benefits of his new strike partner just ten minutes in, hooking Isaac Cooper’s ball against the bar after Shorthouse’s flick on.

For the visitors, Lewis Rand drove Creighton’s cross into the side netting and Ty Belford denied their best chance by racing out to prevent Francisco, who was clean through from Dodd’s pass.

The sides continued to exchange attacks, and Hinckley had their spell on top when Mark Williams found Richards, who hurdled a challenge and fired across the face which just eluded Shorthouse.

Then, Brindley and Jake Brown combined to set up the debutant whose effort was well blocked by visiting ‘keeper Charlie Wood, before Rand’s spectacular effort from range flew narrowly off target as the first half ended goalless.

After the break, though, it took AFC just two minutes to break the deadlock. Just after Creighton’s effort clipped the bar, Hinckley took the lead when Cooper’s floated free kick was guided home at the far post by Cross for his first in a Hinckley shirt.

And, despite a disjointed display, Belford’s side looked to be well on their way to the first round proper when Cooper was the creator again midway through the half, a long throw headed home by Shorthouse as he made an immediate impact with a debut goal.

But Rocester, as they showed last week in the league game, are never beaten and within four minutes they hauled themselves level again.

They were back in the tie within a minute thanks to Francisco’s stunner from 20 yards which flew into the top corner, giving them hope and making Hinckley nervous.

And parity was restored two minutes later when Creighton was threaded through on goal, and he made no mistake with just Belford to beat.

Hinckley were shellshocked at the sudden eradication of their lead, but neither side created a clear cut chance from then until the final five minutes.

And just as the tie looked to be heading to extra time, Dodd had the decisive final say. He made no mistake in hooking home Jordan Godfrey’s long throw, which crept over the line despite Sam Reuben’s best efforts, to give his side the lead for the first time.

Hinckley had just one chance to take the tie into extra time, but Wood was on hand with a smart double save to first parry away Cooper’s free kick, and then recover quickly to dive at the feet of Brindley who was rushing in for the rebound.

That was as close as Hinckley came, and Rocester held on for their second dramatic win over AFC in seven days.

For Hinckley, it’s the first time they’ve not reached the first round of the FA Vase in five years, and a third defeat in four leaves food for thought ahead of next week’s visit of table topping Brocton.