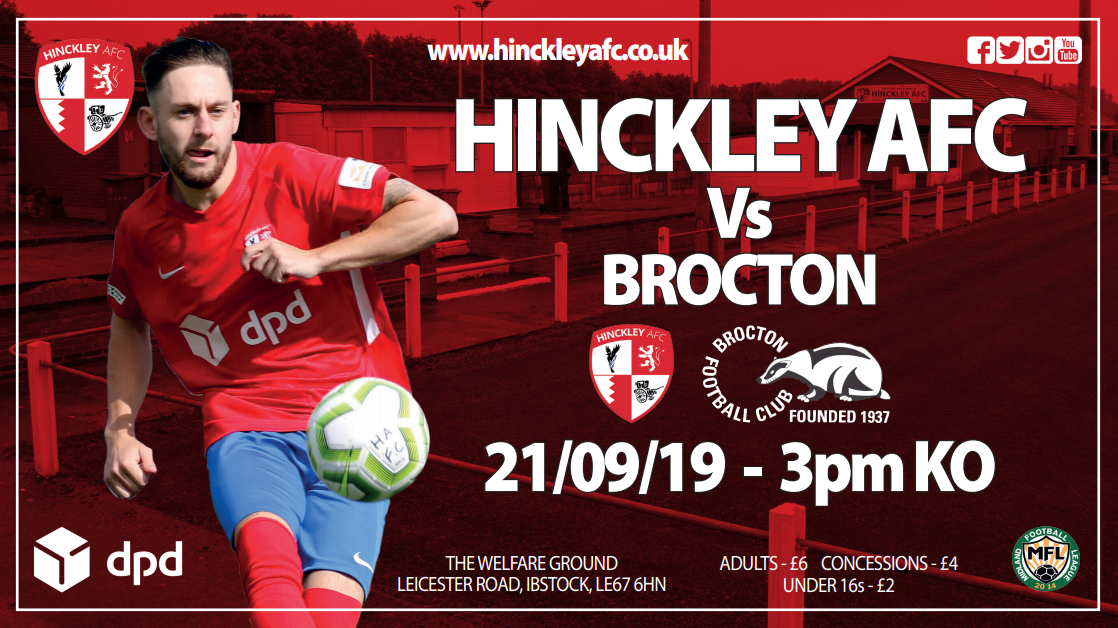 Manager Courtney Belford wants his Hinckley AFC side to put their recent form behind them when they welcome early pacesetters Brocton to the Welfare Ground tomorrow, kick off 3pm.

After an impressive first four weeks in which they won all but one match, Hinckley’s form has slipped recently in losing three of the last four games.

That included back-to-back league and FA Vase defeats to Rocester, having taken the lead only to concede late goals to lose in both.

But Belford says there’s no greater incentive for his side than to beat the team currently in pole position.

He said: “This will be a tough game for us. Brocton are one of the teams who I thought would do well. There are teams in this league who have been together for a long time and Brocton fall into that bracket.

“This is their third year together whereas we’re at the start of that journey with a brand new squad. But if we win we’ll move level on points with them, and there’s no bigger carrot than that for us.”

Having won six of their seven Division One matches so far, the Badgers are three points ahead of third-placed Hinckley and a 3-0 defeat to Uttoxeter is the only blot on their league copybook so far.

But Hinckley will move level on points with them if they come out on top tomorrow.

For Belford, it’s about getting his side to remember what they did well in the early weeks of the campaign, and return to that form rather than the defeats of the last couple of weeks.

“We need to remember what we are and not get above our station. You don’t become a bad team overnight. You’re top of the league after three weeks and everyone says how good you are, you lose a few and everyone says you’re a poor team.

“The way I’ve always been with football, is if you win a game, don’t shout too loudly about it. If you lose, don’t let it affect you too much. We’re trying to stay on that even keel.

“We need to get back to out-working teams, not getting out-fought and out-battled. The players we have are a match for any team, it’s just how we approach the game on the day.”

Nine-goal Regan Smith has been Brocton’s biggest threat so far, but Hinckley will take heart from the fact that Brocton haven’t kept a clean sheet since the oening day.

They also haven’t played for two weeks, having been knocked out of the FA Vase in the first round qualifying and therefore not had a match last week.

Neither side has drawn a match yet this season, yet both games between the sides last season ended level – a dramatic 3-3 stalemate at Silkmore Lane in November followed up by a less than dramatic goalless draw in April.