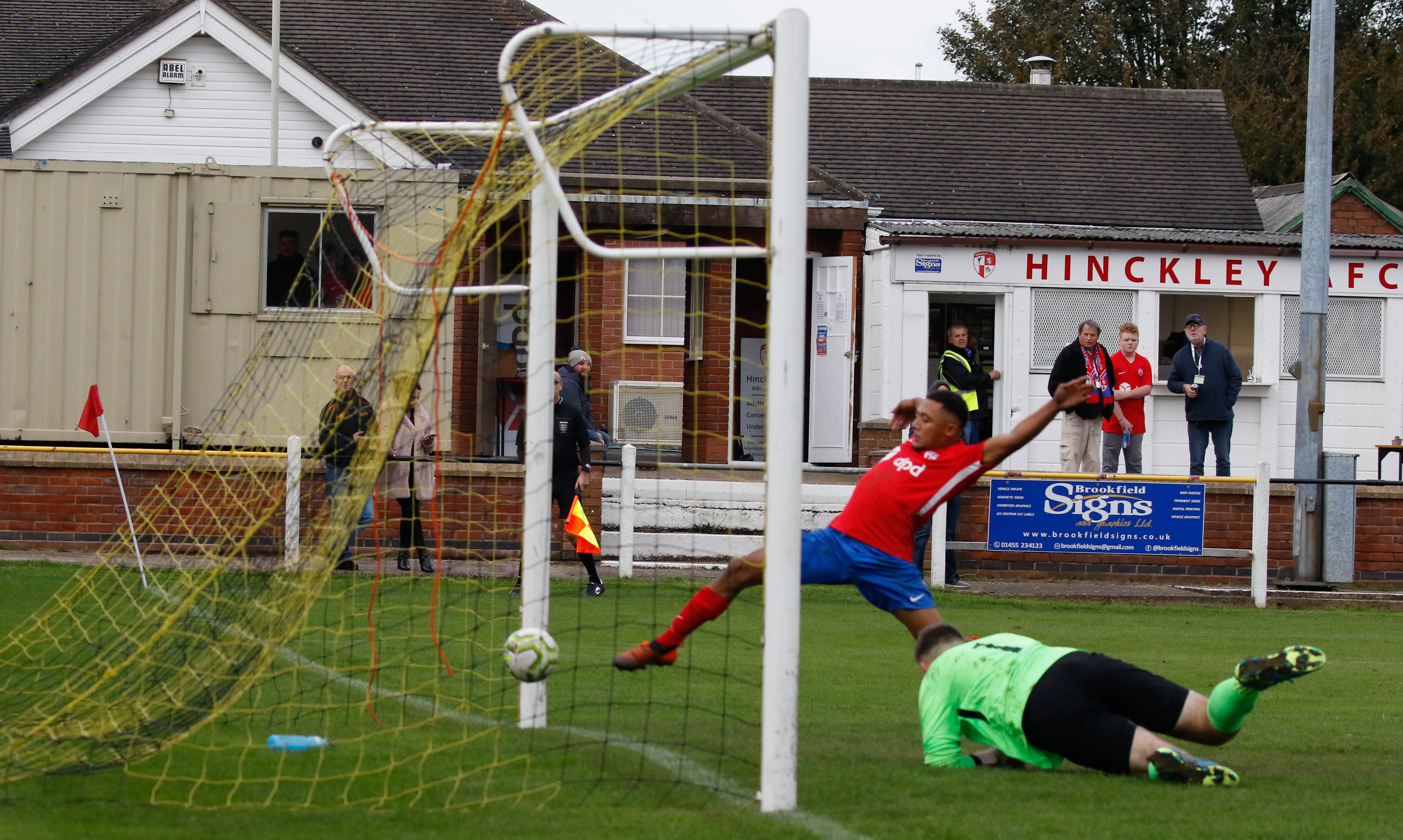 Luke Richards scored a hat-trick and set up another to help Hinckley AFC put five past Kirby Muxloe in an eight goal thriller on Non-League Day.

The game was finely poised at 1-1 just before the break when Richards first struck, and he netted twice more after the break before setting up Tom Smith for Hinckley’s fifth.

But Kirby were never out of the game until the final few moments, a fine treble of his own by Andre Williams meaning it was an entertaining contest throughout.

Courtney Belford made five changes to his Hinckley side that lost to Ashby Ivanhoe in the Senior Cup on Tuesday. Richards, Bekir Halil, Ky Green and Dimitri Dunkley all returned while Adam Harrison took his place in goal after returning on loan from Bedworth United, replacing Ty Belford who has a back problem.

Hinckley started brightly in their quest to get back to winning ways, and Scott Smith was twice involved, a fierce shot deflected wide before setting up namesake Tom to have one saved by Bradley Jones.

And after a quarter of an hour, their pressure paid off. Jake Brown did well to win the ball on the left, and pulled a low ball across goal where Harry Solomons turned into his own net under pressure from Scott Smith.

That sparked Kirby into life, and after Mussa Yussef angled one across goal having beaten Harrison to the ball, they levelled when Williams latched onto Solomons’ long diagonal pass and finished well.

Shortly after, Dunkley’s jinking run ended with a challenge in the box, but the referee waved play on despite his assistant flagging for a penalty.

But that was the only real action as the game settled down after the equaliser, until shortly before the interval when Hinckley started to threaten more.

Tom Smith volleyed over, before linking up with Brown whose shot was superbly turned around the post by Jones.

Jones then denied Smith again after Dunkley’s low cross, but Hinckley then made their pressure count on the stroke of half time when Richards bundled Dunkley’s cross home through a crowded goalmouth.

It put Hinckley ahead at the break, and they extended their lead 15 minutes into the second half.

The goal came from a Halil free kick, which Richards guided back across goal with a precise header into the corner.

Again, the visitors responded well to a Hinckley goal and after Aaron Love fizzed a long distance strike past the post, they clawed themselves back into the game when George Bosworth fed Williams, who scored from just inside the box.

Williams, their biggest threat throughout the afternoon, came closest to an equaliser when he skimmed the bar from range, but it was Hinckley’s afternoon and Richards made sure of that with ten minutes left.

After Dunkley made good ground down the left, Richards lashed his low cross into the roof of the net from 12 yards to ease Hinckley’s nerves.

AFC were then grateful for a goalsaving tackle by Brown as Kirby looked to get back in it, and it made Hinckley more relaxed as Dunkley went inches away with a cross-shot from the right hand angle, and they added a fifth with two minutes left.

Richards was involved again, turning from scorer to provider as he caught the Kirby defence napping and whipped in a cross for Tom Smith to head home at the near post to make it 5-2.

Williams had the last laugh, wrapping up his own treble with a stunning long ranger into the top corner, but it was Hinckley’s afternoon as they moved back into the top four ahead of next week’s visit to Studley.