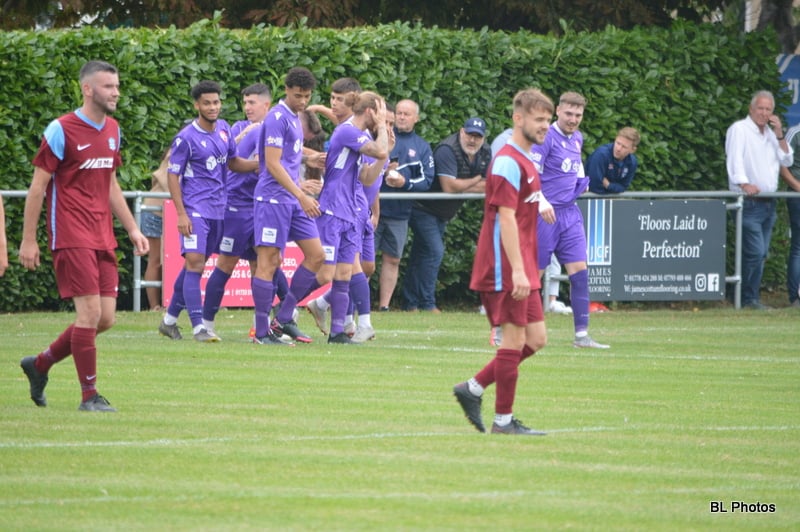 Two goals in each half maintained Hinckley AFC’s unbeaten start to the season with a 4-1 win at Bourne Town.

Depleted through injuries and isolation, Hinckley defied their missing bodies with an excellent first half in which Tyson Knight and Lewis Rankin put them in control.

Bourne hit back early in the second half to make it nervy for a time, but Rankin and Kai Gibbs put the game to bed late on.

Courtney Belford made five changes, many of them enforced, to his Hinckley side. Isa Abraham, Mikkel Hirst and Nick Brandish (all hamstring), plus Tom Weale (isolation) joined Ky Green, Ben Newport and Jeremie Agholor on the treatment table.

Despite that, Hinckley started brightly. Less than a minute had gone when a neat move involving Callum Martin ended with Dan Hoskins blazing over.

That move had a greater impact though. Home ‘keeper John Swales broke his nose in a collision with Martin, and after treatment he couldn’t continue. It meant substitute stopper Kyle Evans was quickly called upon.

He had little time to settle in. A minute later, Lewis Padmore got half a yard on his man and lofted one goalbound, the retreating Evans with a fingertip save to push it wide.

Padmore then curled one wide before Evans made an even better save, pushing Ryan Murphy’s header onto the post and gathering at the second attempt.

Hinckley continued to play their stuff on the impressive surface at Abbey Lawn. Knight and Padmore both had half chances before AFC hit the woodwork again, Evans pushing Rankin’s free kick onto the upright.

But from the resulting corner, Hinckley finally gained their reward. It was as simple as they come, Rankin’s corner met by the unmarked Knight to power home the opener.

Eight minutes later, they extended their advantage. Rankin turned from provider to score, but was indebted to Murphy’s magnificent turn to set him free and convert a cool finish past Evans.

But the second half was a different story as Bourne started it on top. Indeed, they halved their deficit six minutes into it when Tim Worgan sent Jake van de Drift through on goal, and he stroked past Hill.

At this stage, you wondered whether Hinckley might regret their first half missed chances as the home side continued their upper hand.

But they never forced Hill into a save and Hinckley gradually clawed their way back on top again. Jack Edwards bent one wide, Rankin forced a smart save from Evans, Ben Moss’ goalline clearance denied Gibbs and Murphy glanced a free header wide as Hinckley sought the goal that would make them mort comfortable again.

And they made the clash safe with ten minutes to go. Gibbs’ knock down from a deep cross fell for Rankin, who found the corner at the second attempt for his second of the game.

Still Bourne didn’t lie down – Hill made a smart save and substitute Tom Klinkovics hit the post from the rebound.

But Hinckley weren’t to be denied in front of their impressive travelling contingent. They added another two minutes from time through a crisp Gibbs finish after he got in behind, to cap off an impressive display in Lincolnshire.