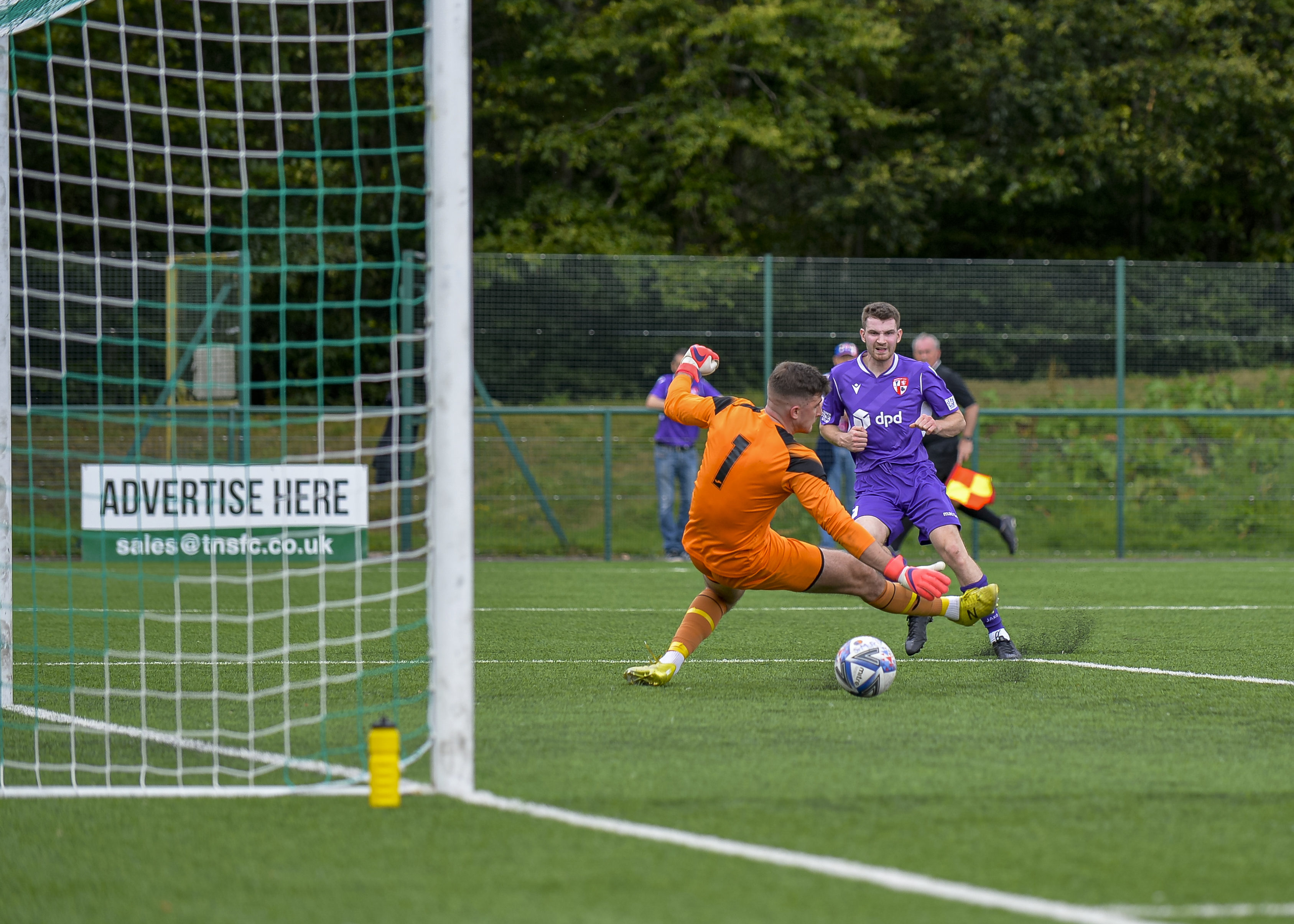 Hinckley AFC set a new club record win as they hit 18 at St Martins in the first round qualifying of the FA Vase.

Hinckley were ahead inside two minutes and seven up by half time as debutant Charlie Evans bagged a hat-trick.

Substitutes Joel Heely and Kai Gibbs ran riot in the second half as they bagged four each to set their side to an afternoon they will never forget.

Evans, a new signing from Rugby Town, came straight in for his debut while Ben Kendrick and Nick Brandish also returned to the starting line-up.

And Hinckley fans had barely made it behind the goal to cheer their team on when Ryan Murphy calmly slotted home the opening goal.

Evans then hit the bar and had a header pushed wide by the goalkeeper as Hinckley dominated. He wouldn’t have to wait long to get on the scoresheet, but Kendrick got the next with a powerful header from a Dan Hoskins corner.

Hinckley were using the 3G surface to their advantage and moving the ball quickly and clinically. Murphy slid home Drew Kear’s low cross for his second, and a minute later Evans got his debut goal converting the rebound after Murphy was denied his hat-trick.

That put Hinckley essentially into the next round with just 16 minutes on the board, and they didn’t let up.

Jeremie Agholor then bagged his third in three games, a similar goal as Evans was denied and Agholor slid home the rebound ahead of a static defence.

Ryan Slinn’s composed finish made it six, before Evans went through one-on-one and finished for a seventh before half time.

Watching at the other end was AFC ‘keeper Matt Hill, who was called into action on the stroke of half time to save Rahuf Mak’s chip.

But the ongoing side story was Murphy’s battle for a hat-trick. He was denied by two excellent saves, and blazed over a golden chance as his treble went begging.

That was to be his last shot at the matchball, as he was replaced at half time by Gibbs.

Gibbs was quickly into the action himself, but not before Evans bagged a debut hat-trick when he converted from the spot after Agholor was brought down.

Then it became the Gibbs and Heely show, as they scored four each in the remaining 40 minutes.

Many of their goals were the same – Gibbs often in the right place at the right time to finish off intricate build-up play, and Heely’s often cool one-on-ones.

That said, Gibbs’ first required more than just a standard finishing touch as he stroked home Kear’s pull back from the edge of the box with a crisp finish.

Ben Whitehead then bundled home his first for the club and captain for the day Jack Edwards bent home an 11th just before the hour.

St Martins had their best chance when Ash Leather’s well-struck shot flew inches wide, while Hill also had to be on hand to prevent Brandish’s deflection finding his own net.

But by then, Hinckley were aware of the existing club record and were in ruthless mood to ensure it’ll likely never be surpassed.

Heely got in on the action with his first midway through the half, and Gibbs equalled the previous best with 18 minutes to play.

The duo then shared the remaining goals between them, with Kear remaining influential down the right hand side and he earned as many as seven or eight assists.

Heely wrapped up proceedings, scoring the final two goals in the last four minutes to take Hinckley to 18.

To St Martins’ credit, they never resorted to trying to foul Hinckley or make nasty challenges, and they nearly had the final say with a shot that flew narrowly wide.

But this was Hinckley’s day – and Hinckley’s record that will likely never be beaten.