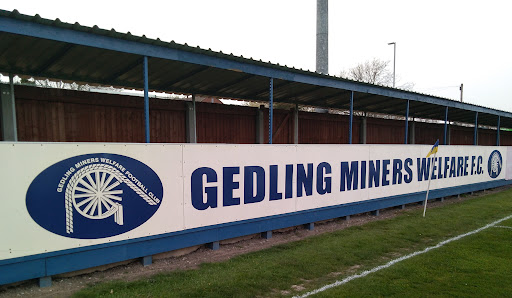 Hinckley AFC maintained their lead at the top of the table with a sparkling second half performance against Gedling Miners Welfare that lit up a gloomy afternoon at Plains Road.

It didn’t look so straightforward for Hinckley at the break, it was a keenly contested first half with only Ryan Harkin’s goal separating the sides at the interval.

But once Jack Edwards had doubled their lead early in the second half, the visitors cruised to victory.

The early exchanges were cagey and both sides were limited to long range efforts. Dan Hoskins was off target a couple of times for Hinckley whilst Greg Tempest tried his luck from distance for Gedling, as did Kyeron Daws with a speculative effort that went narrowly wide.

The deadlock was broken on the half hour mark. Lewis Padmore broke clear, his low cross found Harkin whose initial effort was blocked, and though he didn’t make the cleanest contact with his second shot, it wrong footed Matthew Simpson and nestled in the bottom corner.

Gedling’s greatest threat was from set pieces. They forced a series of corners either side of half time, when well rehearsed routines saw them load the six yard box. Matt Hill and his defence found themselves under pressure but they defended their lines effectively to keep a third successive clean sheet that provided the foundation for victory.

The second goal of the game was critical and Hinckley scored it seven minutes into the second half. Drew Kear did superbly to get to the right hand bye-line and pulled the ball back for Edwards to tuck the ball home with aplomb.

The conditions were awful, but despite the incessant rain throughout the game, the excellent playing surface held up well. Hinckley took advantage of that to knock the ball around confidently and pile the pressure on their hosts.

The third goal came on the hour. Ben Vallance had a fine game, essentially as a defender, but his vision picked out Harkin through the inside left channel, and he was fouled by Josh Thornton before emphatically converting the spot kick.

Not to be outdone, Edwards then added his second of the game, a clinical finish as he drove home a loose ball from the edge of the area.

And the scoring was completed late on when Nick Brandish underlined his impressive recent form by volleying home his first goal for the club from a tight angle.