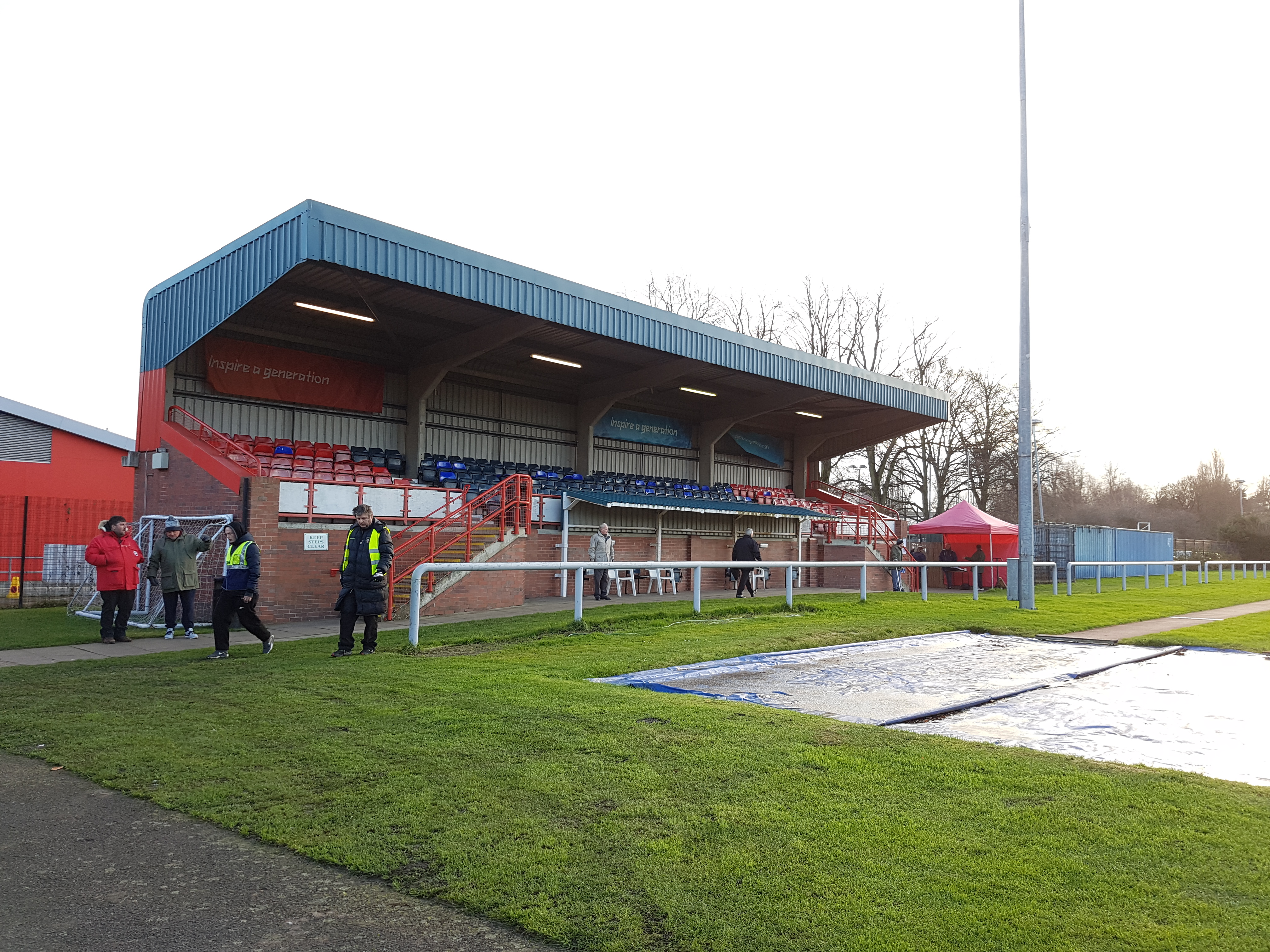 Hinckley AFC won their first game of the season as two goals in two minutes beat Nuneaton Griff at the Pingles Stadium.

AFC trailed going into the final 20 minutes, thanks to Ashley Wilks’ close range finish putting the home side ahead.

But Grant Ryan’s header was quickly followed by Kieran Harrison’s 25-yarder to turn the game on its head and secure all three points for unbeaten AFC.

James Jepson made three changes to his side beaten in extra time by Anstey Nomads in the FA Cup last week. Adam Harrison returned in goal, while Jean Dakouri and Matt Antcliff made debuts.

At the start of play, Griff had lost every game while unbeaten AFC were also yet to win – but there was little between the sides in the first half and goalmouth action was sparse.

Hinckley perhaps shaded the play but created little to show for it, Sam Belcher shooting tamely wide before the same player hit a somewhat sweeter strike from outside the box that was too hot for Lukas Bailey to handle, the home ‘keeper parrying away.

That was the first shot on target 18 minutes in, but Griff had their chances and came closest to breaking the deadlock midway through the half, when Ryan Millerchip hooked a free kick narrowly over.

A minute later, Antcliff had a chance for a debut goal but couldn’t connect well enough with his lob, and the recovering Millerchip cleared from inside the six yard box.

Then, Ryan’s cross caused confusion between Millerchip and Bailey, the defender slicing a clearance inches wide of his own goalpost.

Nuneaton, though, finished the half the stronger and after Ben Ashby’s cross-shot flew comfortably wide, a couple of minutes later substitute Brennan King sliced wide as Hinckley waited for a linesman’s flag that never came.

Lewis Commins was then denied a shot by Toby Moore’s good defending , and Griff’s first shot on target came through George Brindley in first half stoppage time, Adam Harrison holding his effort.

Sandwiched in between that, Kieran Harrison headed over with Hinckley’s best chance as neither side could break the deadlock before the break.

The second half, though, was immediately more open even though it remained scrappy at times. Just three minutes into it, Dakouri set up Belcher on the edge of the box, who was defeated by a bobble as the ball ballooned over.

And just three minutes after that, the home side opened the scoring, when a wide free kick caused confusion in the Hinckley box. Any one of Millerchip, Lewis Collins and Wilks could have fired goalwards, but it fell most kindly to Wilks who made no mistake from six yards.

The hosts should have doubled their lead four minutes later, but Harrison denied Collins with a fine save when one-on-one.

Hinckley sought a leveller through Ryan, who had a shot deflected wide, while Antcliff had a header saved but neither troubled Bailey too much and Hinckley didn’t look a real threat.

Indeed, it was Harrison who remained the busier of the keepers, and he made a second fine save to prevent Commins making it 2-0.

And those saves proved crucial as the game entered its final 20 minutes.

With 18 to play, Hinckley showed what they are capable of, a goal almost out of nothing as Tom Maddison’s fierce cross picked out Ryan perfectly, the striker meeting it with an equally fine header to level the scores.

That was clinical from AFC, and the cheers had barely died down when Harrison was allowed space to run at the Griff back line, unleashing a powerful strike from range which Bailey could only turn onto the post and in.

With the complexion of the game completely shifted in the space of two minutes, Hinckley now held the upper hand and, in truth, never really looked like relinquishing their lead – though Commins had a go when he cut in from the left, only to see his effort deflected wide.

But Griff then gained in spirits when Hinckley were reduced to ten men with 11 minutes remaining, Ryan shown two quickfire yellow cards for what appeared to be something said to the referee.

Even so, it was Hinckley who came closest to another goal when Antcliff crossed for Steve Chaplin, the substitute’s fine header thwarted by a fine flying save from Bailey.

That would have killed the game off, but Bailey’s save kept his side in with a fighting chance and the hosts had plenty of the ball in the closing stages.

After Wilks’ header was deflected over, substitute Scott Warr had their best sight of goal but his prodded volley was stopped by Harrison again.

And the last of Griff’s set pieces came deep into stoppage time, which Harrison claimed well under pressure. The goalkeeper was bundled into the back of the net, the referee blowing for a foul despite Ashby and Bailey optimistically claiming a goal.

When Harrison took the free kick, the referee called time on the game and Hinckley secured their first three points of the campaign at the home of their local rivals.