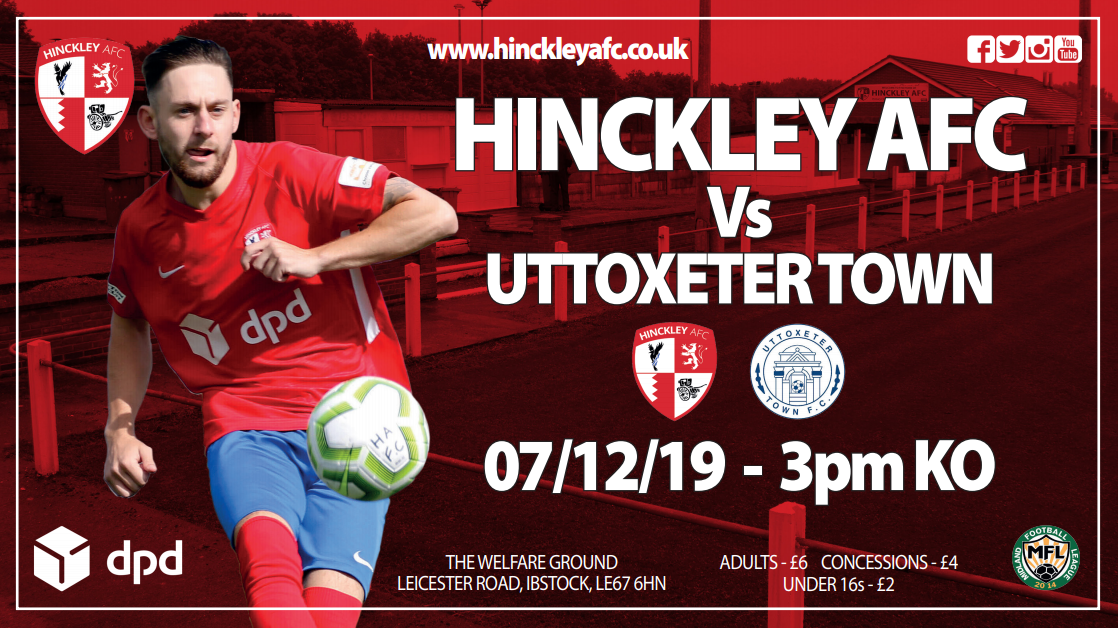 Hinckley AFC will look to put Tuesday’s defeat behind them when high flying Uttoxeter Town visit the Welfare Ground this afternoon, subject to a morning inspection.

After the rainfall yesterday, a local referee will check the condition of the pitch at 11.30am this morning, and we’ll post the result as soon as we know it.

Should the game go ahead, it will be a chance for Hinckley to quickly move on from the disappointment on losing to Stafford on Tuesday, a game in which they dominated the first half but struggled to test the visiting ‘keeper after the break.

After back-to-back defeats, Hinckley will be looking to get back on track in their quest for the top four against a side who currently occupy the last of those spots.

Manager Courtney Belford, though, takes heart from his side’s displays from previous games against sides towards the top.

He said: “Other than the Leicester Road game, where we had a man sent off early on, we’ve played well against the sides around us at the top. We’ve beaten Brocton and Lichfield, and picked up a good point at Studley.

“But today will be a tough task. Uttoxeter are a good side and a group who have been together for a long time and that’s the same for a lot of sides at the top.

“In contrast we’re at the start of our journey on what we want to be a long-term project.”

Visiting the Welfare Ground are a Uttoxeter side who have enjoyed an impressive start to the season and sit fourth, five points ahead of Hinckley.

But like AFC, their recent spell has been affected by the weather and they haven’t played a league game since 19th November. They beat Stapenhill 5-2 that day, getting back to winning ways three days after a defeat to Studley.

They have won ten of their 15 games, and have 31 points to show for their efforts so far.

Jake Avery has netted 12 times this season and is their leading scorer this season, while Kyle Esplin and the ever-threatening James Curley have eight and seven apiece – Curley’s tally from just seven games.

Curtis Townley could feature back in the matchday squad for Hinckley after three months out with ankle ligament damage, while Belford has no new injury concerns after Tuesday. Mark Williams remains suspended.

You’ll be able to read more from Courtney in his notes in today’s matchday programme, available for £1.50 from just inside the turnstiles.