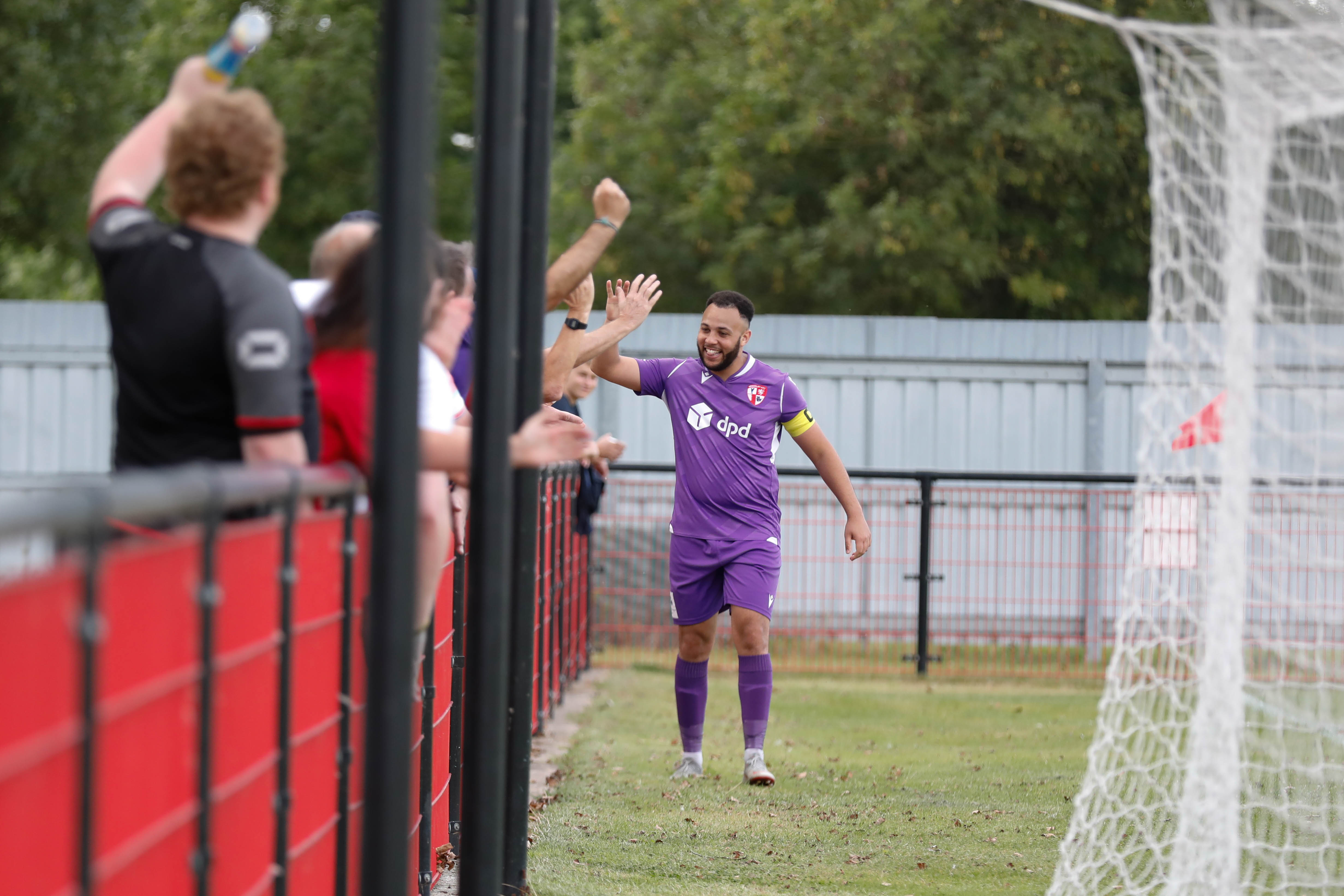 It was another Super Saturday for Hinckley AFC as they won their third successive weekend game 4-0 at Dunkirk.

They’ve scored 14 goals in the process on Saturdays this season whilst conceding just one in the same time.

The returning Tom Weale bagged a first half brace to set them on their way with Lewis Rankin and a debut goal from Jeremie Agholor completing the scoring to make it a near perfect afternoon for another healthy contingent of travelling fans.

Weale was the only change from last week’s win at Bourne, coming in for Ryan Murphy.

In glorious sunshine, the teams traded early chances in a scrappy start, littered with free kicks. One of those set pieces saw Rankin curl an effort wide from the edge of the area before at the other end, Dunkirk broke well down their right but Tom Batterham couldn’t get his shot on target when well placed.

The game turned Hinckley’s way midway through the half. Jack Edwards enjoyed another industrious game in midfield and he slipped a pass to Lewis Padmore who was felled in the box by Adam Burton. He was booked and Weale, back from isolation, converted the penalty.

They doubled their lead on the half hour with a well worked goal. It began when Edwards was fouled in midfield, but the ref played a good advantage as the ball reached Rankin on the right flank. The skipper did well to hold the ball up and wait for support before beating his man to deliver a deep cross that Padmore headed back across goal for Weale to finish.

Those goals lifted AFC who got on top as the half ended, passing the ball well. But they almost had a rude awakening at the start of the second half, when the unmarked Batterham had a free header on the edge of the six yard box – but the ever impressive Matt Hill made a great save to push the ball away for the corner.

Hinckley soon punished their hosts for that miss. Weale collected a loose ball midway inside the Dunkirk half, thought about chipping the keeper but opted to run goalwards before slipping a precise pass into the path of Rankin who applied a cool finish.

That was game over. Dunkirk made a trio of substitutions to try and salvage something, and one of those subs, Keiran Diver, almost scored with his first touch denied by a wonderful tip over from Hill at point blank range as the keeper took great satisfaction at preserving another clean sheet.

It was left to AFC to complete the scoring, a surging run down the right flank from Drew Kear ended when he was blocked in the area, but the loose ball fell to Agholor who curled a sublime finish inside the far post to complete a very satisfactory afternoon for Courtney Belford’s men.

They will now look to improve their midweek form at Birstall United on Tuesday evening.