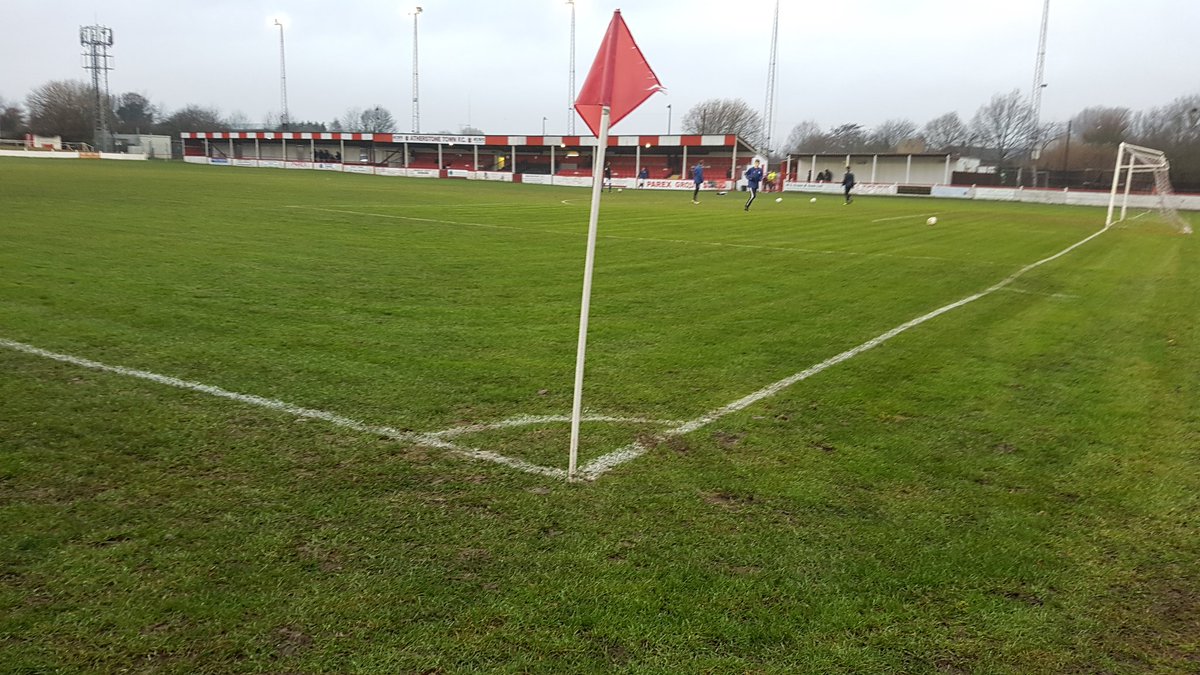 Three goals in the final ten minutes condemned Hinckley AFC to a 3-0 defeat as Atherstone Town returned to the top of the table after their late show at Sheepy Road.

In atrocious conditions, both sides tried their utmost to play in the pouring rain and howling wind but the sides were still locked level with ten minutes to play.

It was a scoreline that was harsh on Hinckley, who defended well for large spells despite the home side having the better of the second half – but it’s now three straight defeats for John Ramshaw’s men.

Ramshaw made three changes to the side beaten by NKF Burbage last week. Chad Timson and Anton Daniels returned while Tyrone Burton made a debut at centre back.

With leaders Racing Club Warwick’s match postponed, Atherstone knew a win would send them back to the summit and they started brightly in their quest for three points.

The tricky Jonathan Gould provided the spark for most of their early attacks, the first coming three minutes in when he danced past two defenders and pulled back for Ryan Quinn to see a shot blocked.

Then, Quinn picked out Woolley who dragged one into the side netting, before Gould sparked another attack by finding Joe Obi. He pulled back for Woolley only to see George Warren pull off a wonderful save from point blank range.

But after the first quarter of an hour, Hinckley started to gain more of a foothold in the game and had their first effort after dozy defending saw Nathan Haines touch one back to goalkeeper James Beeson, who picked up the backpass inside the six yard box.

The home side still had the better of the game at this stage, Quinn’s scuffed effort held by Warren and Obi’s glancing header from Martin Hutchcox’s cross looping over.

After that, though, Hinckly gained the upper hand and the visitors finished the half the stronger of the two sides.

Just before the half hour, Nkosi Mzungwana picked out Wilson with a low cross – the striker working space before unleashing a drive which Beeson tipped over at full stretch.

Wilson then called Beeson into more comfortable work with a header from Timson’s cross, and Louis Hamilton had one deflected wide in stoppage time.

Kicking down the slope after half time, Atherstone had the better of the play after the break though and Hinckley’s attacks were more sparse than in the first period.

They came close seven minutes after the break when Kyle Baxter did well to break free of a challenge and feed Obi, who was denied by Warren’s smart save. Woolley got to the follow up first but was denied by a fine block from Jason Lee, and Quinn blazed his rebound over.

Warren then denied Gould, before Hinckley’s first effort of the second half came through substitute David Jones, who flicked wide from Belcher’s near post cross.

As Atherstone quickly resumed their control on possession, Adam Bilic blazed over after Obi was crowded out – but the hosts rarely called Warren into action for the next phase of the game as Hinckley defended well.

Woolley found the side netting and Gould slice wide from range as Hinckley made it to the 80th minute still level and grew in belief that they would take something from the game.

But that all changed with ten minutes left. A high hanging ball into the box got caught on the wind, and forced Lee into uncharacteristically missing his header. Woolley anticipated well, and steered the loose ball beyond Warren to break the deadlock.

With the complexion of the game having shifted, Hinckley now threw men forward in search of an equaliser and came close just two minutes later when Belcher’s corner was met by Callum Willimont, but Atherstone cleared off the line.

The hosts broke, and when Burton was caught in possession on the edge of his own box, Atherstone worked it for Woolley to slam home a second in four minutes and kill Hinckley off.

And they added a third with the final attack of the game when Naughton was sent through on goal, and with Hinckley waiting for an offside flag that never came, the substitute never looked like missing as he found the back of the net to wrap up the win.

It condemned Hinckley to a third straight defeat, and they’ll be seeking a quick reaction when Nuneaton Griff visit the Welfare Ground on Tuesday.